St. Sahag St. Mesrob Armenian Saturday School celebrated the 23rd Anniversary of Independence of Armenia and Artsakh on September 20, 2014 with Rev. Archpriest Fr. Zargarian, Principal Dr. Arpi Panossian, Vice-Principal Mr. Ara Ter Harutunian, fifteenteachers, five assistant volunteers, and over 170 students. Amongst the invited guests were previous principals Mr. Vartan Vartanian and his wife Sirvart, Mr. Yetvart Balian, Mrs. Sona Kevork, Parish Council members of the Holy Trinity Armenian Church, and parents of students. The event took place in the beautiful facilities of Hawthorn School for Girls, which is the new location of St. Sahag St. Mesrob Saturday School.
Grade eight students and the 2014/2015 alumni presented a beautiful program of Armenian poems, declamations, and songs accompanied by Mrs. Nata Navasartyan on the piano. The program concluded by graduate students sharing their thoughts and experiences from their pilgrimage to Armenia in July 2014.
In her welcoming message to the 2014/2015 academic year, Dr. Panossian acknowledged the tremendous work of the School Council, the vice-principal, the teachers, and the volunteers who, under the guidance of Fr. Zareh Zargarian and the Parish Council, are working hard in order to move the school forward successfully. 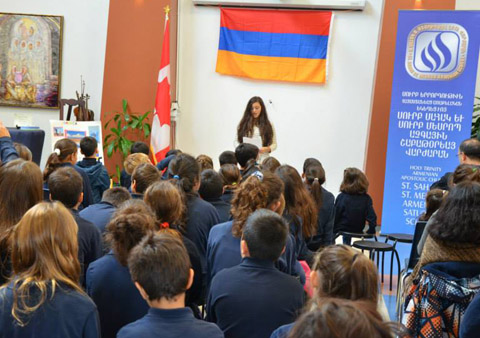 Fr. Zargarian delivered his message on the occasion of Armenia’s Independence and the opening of the school year. He encouraged the students to be very proud to be Armenians as well as good Canadian citizens. He encouraged parents to be involved and to take pride in caring for their new school in order to make it a better place for all Armenian children. Fr. Zargarian reminded the audience that the School will be celebrating its 60th anniversary in 2015. He requested that all present encourage their friends and relatives to bring their children to Armenian schools in order to receive an education in the Armenian language, religion, arts, and culture. With closing prayers, the celebration came to an end and students and teachers entered their new classrooms to begin a new academic year. See more photos… 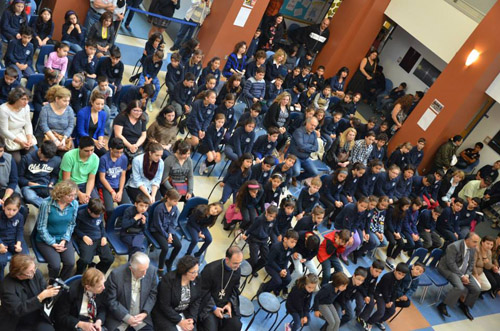