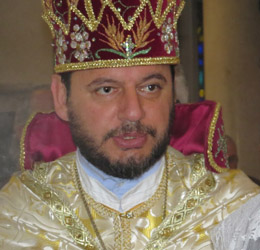 His Grace Bishop Abgar Hovakimian (baptismal name Samvel) was born on July 23, 1972 in Batoumi-Republic of Georgia. From 1979-1989 he received his elementary education in the Stepan Shahumian Armenian school in Batumi.

From 1989-1995, he studied in the Theological Seminary of the Mother See of Holy Etchmiadzin defending his graduation thesis entitled “The Echoes of Armenian Doctrinal Thinking in the Interpretation of the Gospel of Matthew by St. Nerses the Graceful”.

In 1995, he was ordained a deacon by His Grace Bishop Anania Arabajian.

On June 2, 1996, he was ordained a celibate priest by His Eminence late Archbishop Shahe Ajemian, and given the priestly name of Abgar.

From 1996-2001, following his ordination as a celibate priest Father Hovakimian served at the Diocese of Georgia as Pastor of Soorp Prgitch Church in Batumi, Republic of Georgia.

By the Pontifical Order of His Holiness Karekin II, Supreme Patriarch and Catholicos of All Armenians he continued his higher education at the Theological University of Salzburg, Austria from 2001-2004, and received a Master’s Degree in Theology. In 2006 he defended his dissertation entitled “Dionysius Areopagite in Armenian Bibliography” and received the rank of Archimandrite.

From 2005-2010 has served as Vicar General of the Diocese of Syunik in Armenia, assisting the Primate in the evangelization work and successfully organizing youth ministry within the Diocese.

The Very Reverend Father Abgar Hovakimian was elected Primate with a majority of the votes, during the 31st Annual Assembly of the Armenian Church Canadian Diocese, on May 31, 2014 in Oakville, Ontario.

On November 16, 2014 the Episcopal ordinations for three new bishops of the Armenian Church were conducted in the Mother See of Holy Etchmiadzin. His Holiness Karekin II, Supreme Patriarch and Catholicos of All Armenians celebrated a Pontifical Divine Liturgy and thereupon consecrated, ordained and elevated Very Rev. Fr. Abgar Hovakimian, Primate of the Armenian Church Diocese of Canada to the rank of bishop. 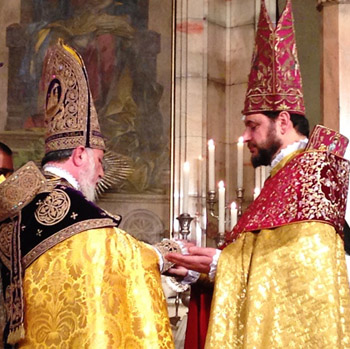