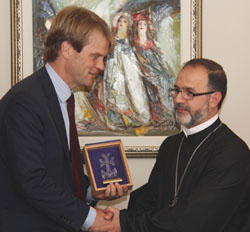 The minister was greeted by a warm welcome on the front steps of the church by Rev. Archpriest Fr. Zareh Zargarian and members of the Armenian Family Support Services (AFSS), an organization that offers support and settlement services to newcomers and refugees of Armenian descent in the Greater Toronto Area.

Accompanying Minister Alexander were Roxanne James, Member of Parliament (MP) for Scarborough Centre, and Saro Khatchadourian, the special advisor to the Minister who orchestrated this memorable visit.

Fr. Zareh led the Minister and the MP on a tour of the chapel and explained the history of the sanctuary as well as the significance behind the beautiful iconography. Following the conclusion of the tour, which included conversation about Minister Alexander’s posts abroad as a Canadian diplomat, the group moved to the parish council boardroom for a presentation by the Armenian Family Support Services organization.

Maida Icliates, chairperson of the AFSS, introduced its membership to the Minister and MP, and provided an overview of its programming and plans for the future. Minister Alexander commended the AFSS on its mission and the remarkable support they provide for refugees and newcomers to Canada. He also expressed his most sincere greetings on behalf of Prime Minister Stephen Harper and the Government of Canada.

Fr. Zareh and Mrs. Icliates expressed their gratitude to Minister Alexander and MP James for visiting HTAC and presented the parliamentarians with a beautiful crystal cross and an AFFS memento package as a token of their appreciation.

This visit is a testament to the Government of Canada’s ongoing commitment to fostering an open dialogue with Canada’s Armenian communities.   See more photos… 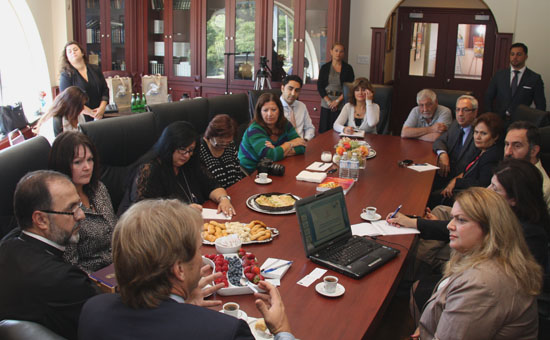 With The Honourable Chris Alexander, Canada’s Citizenship and Immigration Minister and Roxanne James, Member of Parliament (MP) for Scarborough Centre