Turkey recalls its Ambassador to protest the event

On the fifth anniversary of the recognition of the Armenian Genocide by the House of Commons, the Congress of Canadian Armenians, with the support of 20 Armenian organizations from across Canada, organized a special event on April 21, 2009 in the Parliament Building in Ottawa to honour the Members of Parliament who voted in favour of Private Members’ Bill M-380 which read: “That this house acknowledge the Armenian Genocide of 1915 and condemn this act as a crime against humanity.”

Turkey recalled its Ambassador, Rafet Akgunay, for consultations to protest against the Congress of Canadian Armenians’ event, the presence of high ranking government and parliamentary officials at the event, and the continued use of the word “genocide” by Prime Minister Stephen Harper in his message on the occasion. There was extensive media coverage of the event and of Turkey’s reaction to it, by AFP Mondial, Associated Press, Canadian Press, Reuters, United Press, Jerusalem Post, Hurriyet Daily, CNN Turkey, CBC, CTV, Vancouver Sun, Toronto Star, La Presse and many others around the world. The Globe & Mail article can be seen at:
http://www.theglobeandmail.com/servlet/story/RTGAM.20090422.wturkey22/BNStory/politics/home.
Bill M-380 was introduced to the House of Commons and Moved by Madeleine Dalphond-Guiral (Bloc Quebecois), and was co-sponsored by Jason Kenney (Conservative), Sarkis Assadourian (Liberal) and Alexa McDonough (NDP). Framed certificates of appreciation and recognition were presented to each of them. Also honoured were Shirley Maheu (posthumously) who Moved, and Senator Raymond Setlakwe who Seconded, a similar motion which was passed in the Senate of Canada on June 13, 2002.
A huge crowd of dignitaries, invited guests and the media were present at the event, including numerous Members of Parliament, Senators, Ambassadors of countries that have also recognized the Armenian Genocide, and leaders of the Canadian Armenian community from across Canada.
Prime Minister Stephen Harper supported the passing of the bill, and on April 19, 2006 he formally reaffirmed his and his party’s recognition of the Armenian Genocide. In his message to those that attended the event, he said: “I am honoured to have this opportunity to extend my warmest greetings to all those attending the Congress of Canadian Armenians event to mark the 5th anniversary of the adoption of the resolution by the House of Commons to recognize the Armenian Genocide. Your recognition of the members of the House of Commons who supported this resolution is a truly gracious gesture. I would like to commend the Congress of Canadian Armenians for organizing this event and for your ongoing efforts to foster fellowship in the community.”
Jason Kenney, Minister of Citizenship, Immigration and Multiculturalism, said in his address: “The government of Canada has endorsed and accepted the recognition of the historical reality of the genocide through Prime Minister Stephen Harper’s courageous statement three years ago. That continues to be the position of Canada. Thank you for being faithful to your roots, to your ancestors, to your ancient faith.  Thank you for bringing and enriching Canada with the democratic values that your community embodies and respects so profoundly.  Thank you for enriching our country in so many ways, and let us tonight celebrate and let us this week, as well, mourn and always, always, teach the future generations about the lessons of 1915 so that they are never repeated.”
Michael Ignatieff, Leader of the Liberal Party of Canada and Leader of the Official Opposition, acknowledged the presence of his predecessor Stephane Dion, then said: “Today we join in the grief of the Armenian community, we recognize the sorrow that you still carry with you, and we come together as Canadians no matter our convictions or beliefs to say: ‘never again’. This room is the refutation, once and for all, of Hitler’s infamous remark, ‘who remembers the Armenians?’ Your presence, your survival, triumph, strength, the Republic of Armenia are a definitive refutation of the vicious nihilism of that now departed dictator. Five years ago our Parliament recognized the Great Calamity as a genocide.  We commit ourselves to reconciliation, however difficult, and we commit ourselves to a life of peace in Canada.” Mr. Ignatieff is an internationally recognized historian with a doctorate from Harvard University, and is well informed on the Armenian Genocide.
Anthony Barsamian, board member of the Armenian Assembly of America, said that following discussions with White House officials they are hopeful that President Barack Obama will make a statement on the Armenian Genocide on April 24.
Sarkis Assadourian was given a round of applause for having worked so hard as a Member of Parliament to ensure that the bill was passed.
Earlier in the day, a delegation from the Congress of Canadian Armenians had constructive meetings with Michael Ignatieff, Jack Layton, Leader of the New Democratic Party, and Harold Albrecht, the new Chairman of the Canada-Armenia Parliamentary Friendship Group.
The event was hosted by the Congress of Canadian Armenians and its participating organizations which include: AGBU Alex Manoogian School, Armenian Democratic Liberal Party, Armenian Rights Council, Holy Cross Church of Laval, Nor Serount Cultural Association, S.D. Hunchakian Party, St. Gregory the Illuminator Church of Montreal, Society of Armenians from Istanbul, Tekeyan Cultural Association. It was held with the support of the Canadian Diocese of the Armenian Holy Apostolic Church, the Armenian Catholic Church of Canada, the First Armenian Evangelical Church, and the following organizations: AGBU Montreal Chapter, AGBU Toronto Chapter, Association of Armenians from Egypt, Canadian Armenian Network, Fondation Himnatram Canada, Holy Trinity Church of Toronto, St. Mesrop Church of Ottawa, St. Vartan Church of Vancouver.
The Congress of Canadian Armenians continues to build solid relationships with Canada’s elected officials for the benefit of the community and of Armenian interests. It also seeks to cooperate and work with all other Armenian organizations in Canada that share the same goals. 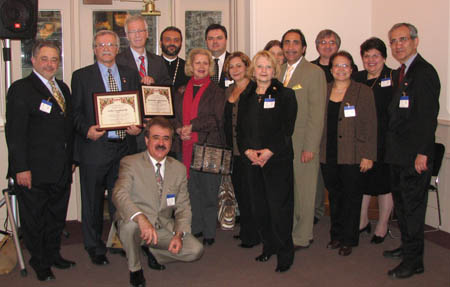