A Canadian Armenian delegation headed by His Eminence Bishop Bagrat Galstanian paid an official visit to the newly elected Mayor of, the City of Toronto, His Worship Rob Ford, on Thursday, January 13, 2011 in the office of the Mayor. 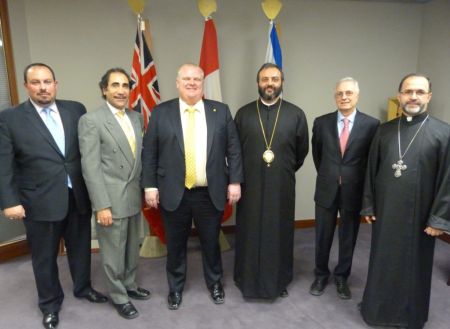 On behalf of the Mayor of Yerevan Mr. Karen Karapetyan, His Eminence presented a letter containing official greetings to the Mayor of Toronto. Bishop Galstanian also expressed his personal congratulations and conveyed the good wishes of the Armenian Diocese upon winning the Mayoralty, in the October 2010 municipal elections.

Mr. Ford was officially installed on December 7, 2010. Serpazan said.- “Dear Mr. Mayor, please accept my heartfelt congratulations upon your election as mayor of this great city of Toronto. I am certain that under your leadership Toronto will achieve greater new heights for the advancement of the city and the benefit of its inhabitants.” His Eminence added “our community is grateful to you for expressing your readiness to allow us to communicate our concerns and help to facilitate establishing channels for future co-operation.” 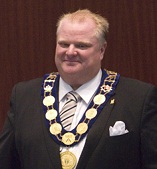 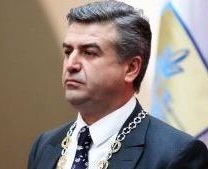 On his part, Mayor Ford thanked Serpazan for the “kind words and thoughts” and emphasized the importance
of similar meetings to address the concerns of Torontonians and explore further means of co-operation.

His Eminence informed the mayor that in 2011, the Canadian Armenian community will mark the 20th anniversary of the Independence of the Republic of Armenia which is an important milestone for all Armenians in Toronto and across the world. In this regard, the topic of the feasibility of twinning Toronto with Yerevan, the capital city of the Republic of Armenia, was discussed. The delegation also shared its concerns on the issue of the Light Rail Transit (LRT) and was pleased to be reassured that Mayor Ford’s views are favourable to our community.

Below is the text of Mayor Karen Karapetyan’s letter to Mr. Ford.-

Allow me to congratulate you on the occasion of your election as the Mayor of Toronto and wish you success in your new responsibility. On behalf of the citizens of Yerevan, I would like to extend warmest greetings.

Dear colleague, I am pleased to express readiness to establish closer relations with Toronto and develop fruitful and ongoing cooperation between our cities. Please accept my congratulations and best wishes upon your election victory.