In his address, Archbishop Hovhanissian told the students that this visit for him felt like being home, being with his children and grandchildren. He felt happy and excited to meet with everyone at St. Sahag – St. Mesrop Armenian Saturday School.

On the same day, the executive members of the Canadian Armenian Association for the Performing Arts (CAAPA) met with Serpazan at Holy Trinity Armenian Church. It was a great opportunity to talk about past and upcoming events organized by this art loving group who have been working under the leadership of Mrs. Lena Ouzounian and for years have provided the Armenian community of Toronto with high quality cultural events.

The Debutante Ball Committee of Holy Trinity Armenian Church, a branch of the Women’s Guild, has been organizing debutante balls for decades. On Saturday, October 5, 2013, the 21st biennial Debutante Ball took place at Bellvue Manor Banquet Hall with the participation of young and talented debutantes and ushers. The organizing committee, under the leadership of Mrs. Anita Ohanessian, were honoured by Archbishop Hovhanissian’s presence that evening. 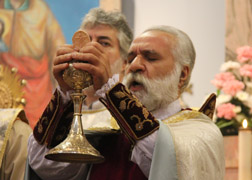 On behalf of the Parish Council, Auxiliary Committees and the faithful, Fr.  Zareh Zargarian welcomed His Eminence. Later, His Eminence blessed two new doors flanking the side altars, handcrafted and donated by Mr. & Mrs. Garo & Yeghisapet Zakarian in memory of their beloved parents.

A reception followed in honour of Archbishop Hovhannisian in the Magaros Artinian Hall. He was welcomed by the Parish Council. The Auxiliary Bodies and Committees were introduced and presented to Serpazan by Fr. Zargarian. It was a great opportunity for everyone to learn more about the activities, events and services offered to the community at large by over 30 committees.

At the invitation of Fr. Zargarian, the steering committee of the Eastern & Oriental Orthodox Churches and Toronto’s Armenian Interdenominational Committee had a meeting with His Eminence Archbishop Hovhanissian at the Holy Trinity Armenian Church.

On Tuesday, October 8, Archbishop Hovhanissian paid a visit to ARS Armenian Day School and was welcomed by the Principal Dr. Armen Martirosyan, teachers and students. This was followed by an interview with Nor Hai Horizon Armenian TV program, by Mrs. Suzy Melidonian.

At the invitation of Very Rev. Fr. Meghrig Parikian, Archbishop Hovhanissian paid a visit to St. Mary’s Armenian Apostolic Church of Toronto and took part in the church service for the senior citizens of the community. Following the prayers, His Eminence was welcomed by the church delegates, trustees and parishioners.

On the last evening of his stay in Toronto, Serpazan attended the Holy Trinity Armenian Church Parish Council’s meeting. At the end of the meeting he expressed his joy and applauded the hard work and dedication of Fr. Zargarian and the Parish Council in the service of the church.  See more photos…