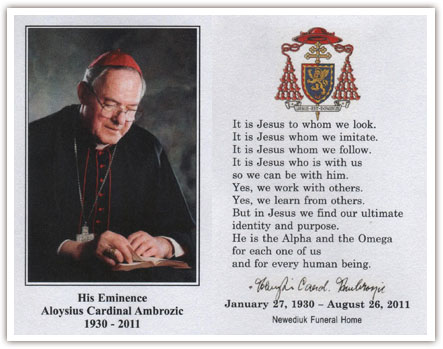 The principal Celebrant was His Grace Archbishop Thomas Collins, the Archbishop of Toronto.
The Cardinal was born on January 27, 1930 and passed away on August 26, 2011. His legacy was commemorated in several places throughout the Greater Toronto Area.

Rev. Archpriest Zareh Zargarian, the pastor of Holy Trinity Armenian church, was personally acquainted with His Eminence Ambrozic and attended the service, representing the Diocese of the Armenian Church of Canada and the faithful members of the Armenian Community.  The letter of condolences from His Eminence Bishop Bagrat Galstanian, the Primate was presented to Archbishop Thomas Collins who was the Celebrant of the service.

We invite our parishioners to pray for the departed soul of the late His Eminence Aloysius Cardinal Ambrozic.