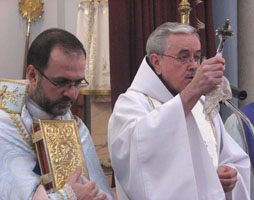 On Sunday, January 25, 2009 after the Divine Liturgy, Rev. Archpriest Zareh Zargarian welcomed and introduced the guest preacher of the day, Fr. Damian to the parishioners and invited him to share his thoughts and deliver sermon of the day. Rev. Damian MacPherson, SA, a Franciscan Friar of the Atonement has been serving in the Roman Catholic Archdiocese of Toronto for the past ten years.

He expressed his joy and gratitude for the involvement of the Holy Trinity Armenian Church in the ecumenical life and relations of Christian Churches in Toronto.

After his Sermon, Fr. Zargarian presented him an Armenian Cross as a token of love and appreciation and asked Fr. Damian to convey the greetings of His Eminence, Bishop B. Galstanian, the primate to the  His Grace, Archbishop Thomas Collins, The Primate of Catholic Archdiocese of Toronto. 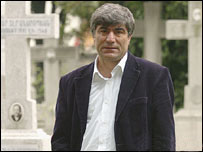 A special Requiem service was offered for the repose of the soul of slain journalist and human rights advocate Hrant Dink on the second anniversary of his assassination.

A large number of parishioners gathered in Holy Trinity Armenian Church to remember him in their prayers and pay their respect.