FEAST OF ST. SARKIS THE WARRIOR

FEAST OF ST. SARKIS THE WARRIOR

This year on February 11th, the Armenian Apostolic Church celebrates the feast of St. Sarkis the Warrior, his son Mardiros and his fourteen soldiers/companions.
Even though St. Sarkis was of Greek descent, he is one of the most venerated and beloved saints in Armenia. He lived in the 4th century and served in the Roman army during the reign of the Emperor Constantine. St. Sarkis was well respected by the Emperor and his court and was appointed to govern in Cappadocia.
When in 361 Julian the Apostate came to the power, he was determined to revive paganism and Christians were severely persecuted. To avoid the prosecutions St. Sarkis,guided by divine instructions,found refuge in Armenia with his son Mardiros. Later St. Sarkismoved to Persia and served in the army of King Shabur as a commander. Following his preaching, many of Sarkis’s soldiers become Christian, but some of them were troubled by it. One day a group of Sarkis’ soldiers came before King Shapur with accusations, that Sarkis was rebelling against the Persian ruler by preaching the Christian faith. The king called Sarkis and asked him to offer a sacrifice to the pagan gods. Sarkis refused, saying he would only worship the one, true God, for which the angry mob attacked and killed his son Mardiros. St. Sarkis was arrested and later beheaded (in the Mazandaran region, Iran). The tradition says that a St. Sarkis’s body was illuminated by the ray of heavenly light. 14 of his loyal soldiers took his body in efforts of giving him a proper burial, but they were martyred as well for their devotion to Christian faith. Eventually Christians secured the remains and sent them to Assyriaand their bodies were buried in the city of Hamian. 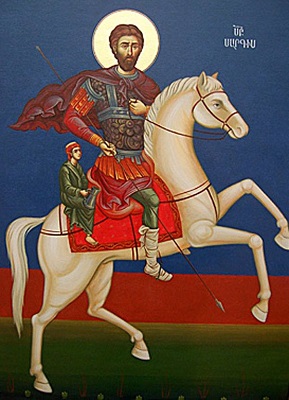 It is believed, that Mesrop Mashtots brought the relics of St. Sarkis to Ushi (near Ashtarak), Armenia. In the place, where his relics rest a monastery bearing his name was built.
The feast of St. Sarkis is a movable feast, which occurs between January 11th and February 15th and is celebrated 2 weeks prior the Great Lent. It is followed by the Fast of Catechumens, which sometimes by mistake is called the Fast of St. Sarkis. On the feast day of St. Sarkis in all churches bearing his name a Divine Liturgy is celebrated. Following the Liturgy all youth in the church receive a special blessing.