The 4th Annual Pan-North American Retreat was held this year in Chicago, Illinois. The retreat consisted of youth from all across the United States—from the Eastern and Western Dioceses—who were all eager to participate in a spiritual, yet fun-filled weekend. From the Canadian Diocese, a group of enthusiastic youth embarked on the lengthy journey to Chicago. Even though one of the participants from Toronto realized that he had forgot his passport at home, an hour into the trip, the group still made it peacefully and punctually to the Techny Towers Retreat Centre in northern Chicago. Upon arriving, you could not help but to notice the exciting energy radiating from the youth there. Walking into a foreign place and meeting a large group of people for the first time may be intimidating for most, but this was not the case at PNAR.
All of the participants embraced each other as if they were their own brother or sister; after five minutes of just idly chit-chatting you felt the feeling that you had been friends forever. 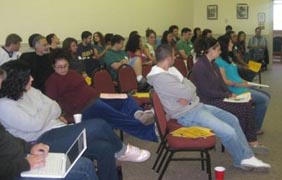 The daily programmes, headed by Fr. Stepanos Doudoukjian, were at the very least educational and spiritually enriching. Youth were engaged in all the topics discussed and the evidence of this was the active participation and passion that penetrated all the discussions. The youth were privileged to receive testimonials and have one-on-one interaction with clergy, seminarians and even each other. Overall, the weekend was a phenomenal experience for every single attendee. The spiritual lessons learned and unforgettable friendships created throughout the short, two-day stay indeed will stay with each and every participant for the rest of their lives. For most, this trip was said to be “epic” and “life-changing”.
Truly, the work of God was visible throughout the weekend because of the fellowship, the collective worship, and overall spiritual dynamic that was unceasingly present.

Special thanks to Fr. Stepanos Doudoukjian, Nancy Basmajian, the ACYO Central Councils, and all the parents and youth that worked behind the scenes to make this weekend as unforgettable and invaluable as it was. (by; Saro Khatchadourian)