The male members of the church choir, conducted by Shahe Altounian accompanied the clergy during prayers.

Fr. Zareh Zargarian welcomed the clergy members of sister churches and expressed his sincere appreciation to the Steering Committee of the Oriental and Eastern Orthodox Churches of Ontario for holding this prayer service in our church and dedicating it to the 100th Anniversary of the Armenian Genocide of the 1915 and thanked all faithful for their presence and support.

At the end of the service, Fr. Zareh invited His Eminence Metropolitan Archbishop Sotirios, Primate of the Greek Orthodox Metropolis of Toronto (Canada) & Chairman of the Canadian Conference of Orthodox Bishops to deliver his message as the guest homilist.

Bishop Hovakimian presented His Eminence Metropolitan Sotirios with an Armenian Cross (Khatchkar – handmade in Armenia).
A light reception followed in “Magaros Artinian” Hall of the church prepared by the Bible Study Group Members. 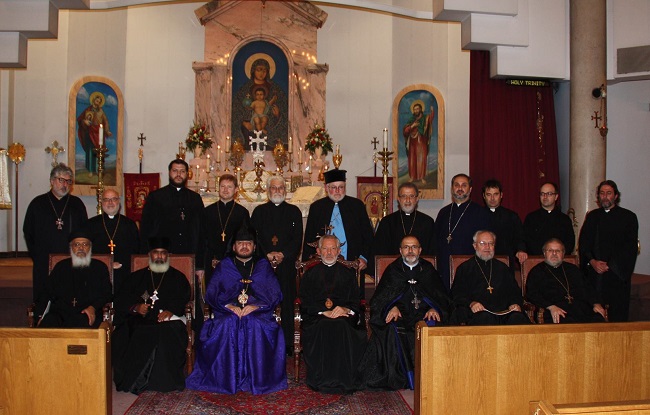