THE 18TH ANNIVERSARY OF ARMENIA’S INDEPENDENCE

THE 18TH ANNIVERSARY OF ARMENIA’S INDEPENDENCE 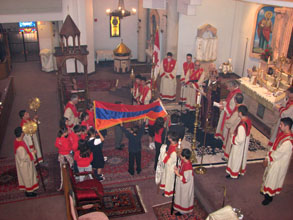 Monday, September 21, marked the 18th anniversary of the establishment of the independentRepublic of Armenia. For this occasion, Bishop Bagrat Galstanian, Primate of the Diocese of the Armenian Church of Canada, has advised parish priests of the Armenian Church Canadian Diocese to conduct the special thanksgiving prayer and the blessing of the flag ceremony for the Republic ofArmenia.

Armenia declared its sovereignty from the Soviet Union on August 23, 1990.  In the wake of the August Coup, a referendum was held on the question of secession.  Following an overwhelming vote in favour, full independence was declared on September 21, 1991.  However, widespread recognition did not occur until the formal dissolution of the Soviet Union on December 25, 1991.  Armeniabecame a member of the United Nations on March 2, 1992.

On Sunday, September 20th, 2009, following the Divine Liturgy, a special flag-blessing ceremony took place at Holy Trinity Armenian Apostolic Churchon the occasion of 18th Anniversary of theIndependence of the Republic of Armenia. 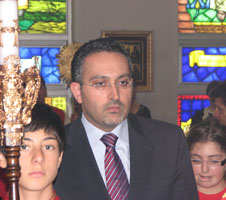 Our Pastor and parishioners were honoured to have a special guest amongst them.  A Lebanese Member of Parliament from Beirut, Honorable Shant Chinchinian, was present during the Divine Liturgy and was asked to come forward to receive a special blessing and the Holy Trinity Armenian Church Medal from Rev. Archpriest Zareh Zargarian. 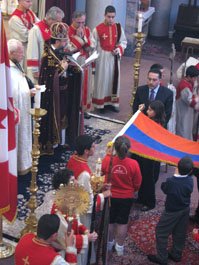 On behalf of the Pastor, parish council and parishioners of Holy Trinity, we wish Mr. Chinchinian the best of success in his important and challenging duties, including representing the large Armenian diasporan community of Beirut.

May God bless our cultural and spiritual homeland and keep our people safe.

O Lord our God, listen to the voice of supplications of your servants and keep unshaken the Republic of Armenia, which you restored through the grace of your mercy.

Hold out your most generous merciful hand and bless our entire people, namely the Armenian nation, and the Armenian Church, so that a spirit of love, peace, understanding, and divine worship would rest upon them.