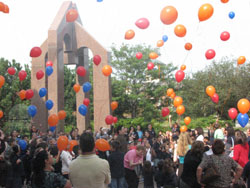 The 2008-2009 school year began on Saturday, September 13, 2008. This was the start of the 53rd academic year of St. Sahag and St. Mesrob Armenian Saturday School of the Holy Trinity Armenian Church. It was a great pleasure for the Principal as well as the Teaching Staff to see our students return to Saturday School to learn and understand the Armenian language, heritage, history and culture. Present were Rev. Archpriest Zareh Zargarian, Parish Council Liaison Mr. Stephan Ekmekjian, Chair of the Board of Trustees Mrs. Taline Moushian, and members of the Board of Trustees.

The 17th Anniversary of the Independence of the Republicof Armenia was celebrated on September 20th 2008. After Principal Mrs. Sonia Kradjian’s patriotic speech, students gathered at the Memorial Statue and after singing the Armenian and Canadian anthems the students expressed their enthusiasm by filling the skyline with red, blue and orange balloons.  The very young students in our kindergarten classes added to the excitement with painted faces in the tri-colours of our homeland.