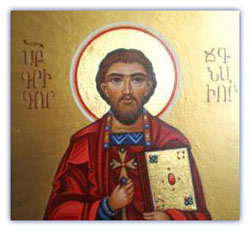 On June 26, 2011, the Holy Trinity Armenian Church had organized a gathering to launch the book St. Grigor Narekatsi’s “Commentary on Song of Songs”. The author, Dr. Levon Petrossian was also present.

Fr. Zareh Zargarian blessed and congratulated Dr. Petrossian for his valuable theological contribution to the Armenian Religious Studies. Using the sacramental wine, he marked one of the books with the sign of the cross. That book will be kept at the Church library.

Antranik Chilingirian was the master of ceremonies. In his opening remarks he described Dr. Petrossian as a person who constantly strives to learn.  He quoted the words of Socrates: “I only know that I know nothing.”

Dr. Petrossian was born in 1976, in Yerevan. From 1995 to 2001 he studied at the Faculty of Theology of Yerevan University and received a Masters degree in Divinity. In 2006, he got a PhD in History from Sorbonne University and a PhD in Theology from the St. Sergius Orthodox Theological Institute of Paris. He speaks 7 modern languages and knows several classical and biblical languages. He has written a number of articles regarding Armenian spirituality. 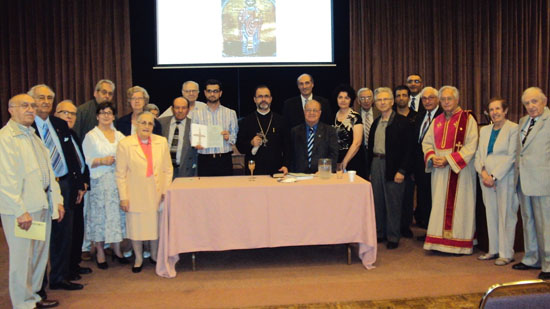 As the main speaker of the day, Dr. Petrossian started his lecture by describing the historical circumstances during which Anania Narekatzi, the maternal great uncle of Grigor Narekatsi, founded the Narek Monastery (Narekavanq) and its adjacent school in 935 AD. 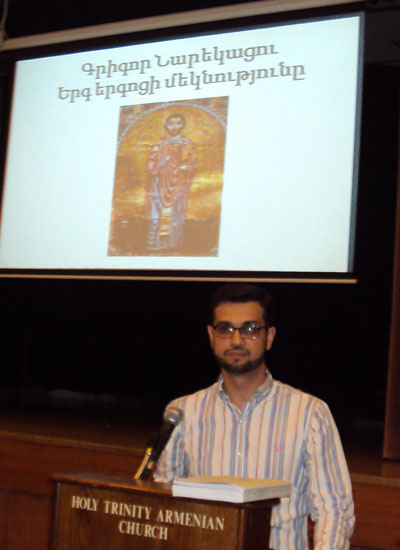 Grigor was a child when his mother died. Fr. Anania took Grigor and his brother Hovhannes under his protection and brought them to Narek Monastery.  Khosrov Andzevatsi, Grigor’s father, was the ruling prince of the Andzevatsiq province. He also entered the religious order and became the Bishop of the region.

Abbot Anania’s main concepts dealt with the Visible Behaviour and Invisible Virtues. According to him, the art of choosing righteousness helped a man acquire spiritual gifts during his life.

Bishop Khosrov’s Ethic System was based on the ideas of Dialogue with God and Spiritual Alertness:  to be constantly in a dialogue with God, always have God in mind and feel a spiritual awe toward God.

These concepts left a permanent impression on Grigor’s outlook on life.

Grigor Narekatsi wrote his Commentary on ‘Song of Songs’ at the age of 30. It was an interpretation of the book ‘Song of Songs of Solomon’.

The Tondrakians, a medieval Armenian heretical movement, believed that the words of ‘Song of Songs’ had to be taken literally and advocated Corporate Love between a man and a woman.

Grigor Narekatsi, on the other hand, attempted to explain the symbolic meaning of the words. So that people would be able to understand God’s Sacrificial Love (Agape) towards mankind, Solomon had allegorically compared God’s Love with the unconditional love between a man and a woman. It was about man’s yearning toward God and his/her attempt to attain complete inner peace.

Through the years Narekatsi’s poetic style reached its perfection.  His monastic experiences and lyrical genius enabled him to express poetically his spiritual sentiments and theological concepts.

His last book was The Book of Lamentations (Matean Voghbergutean) written at the age of 60. Indeed, this book was his ‘Song of Songs’.

The work was intended to be a personalized liturgical book (Pataragamatuyts) of each believer, a dialogue between the sinner and Christ. It would lead the individual to his/her complete inner peace and harmony through Confession of his spiritual Love.

Influenced by his love of Christ, Narekatsi returned to the historical origins of the first Christian communities and he used two symbols taken from Jesus’ life, which gradually were transformed to sacraments: Baptism and the Last Supper. Through his Book of Lamentation, Grigor prepared believers to assist in the Celestial Banquet, the celebration of the spiritual and eternal Wedding between Christ (the groom) and man (the bride).

St. Grigor Narekatsi was loved by all. He was known for his love of God and devotion for the unity of the church.  Due to his saintly lifestyle and his gentle character, he was considered a saint during his lifetime.