Since 1998, Fr. Zargarian has been one of the active members of the Governing Board of Canadian Council of Churches, representing the Holy Armenian Apostolic Church – Canadian Diocese and has been attending the annual meetings and functions.

The primary mission of the CCC is to strengthen the bond between Canadian Christian denominations and have a unified stand about common issues and challenges that Christian community is facing today in Canada and all over the world. 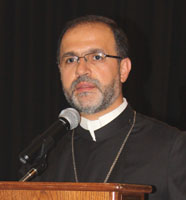 In this meeting the Council particularly addressed the uncertain conditions of Christians in Iraq and condemned the deadliest attack ever recorded against Iraq’s Christians that took place in October during a Mass in Baghdad by a group of fanatics.

The attendees were joined in prayers for the peace in Iraq and around the world. During the evening session on November 25th, Fr. Zargarian delivered an introductory presentation about the foundation, faith, structure and traditions of the Holy Armenian Apostolic Church which was very well received by the representatives and clergies of sister churches.