Pilgrimage to Jerusalem – Summer of 2009

Pilgrimage to Jerusalem – Summer of 2009

There are two places in the world that I believe every Armenian must visit at least once in their lifetime, if possible. The first place we think about is of course our National Motherland of Armenia and the Holy See of Etchmiazin, but we often forget about our Spiritual Motherland – the Holy Land of Jerusalem.

This summer I was able to fulfil my dream of visiting the Holy Land of Jerusalem for the first time. Visiting Jerusalem as a pilgrim from the Armenian Apostolic Church is truly a blessing, knowing that a quarter of the historic Old City belongs to the Armenians and the Patriarchate of Jerusalem; by de-facto it’s considered as “Little Armenia”. Everywhere you go in the Armenian Quarter, you see people speaking in Armenian. The Quarter is currently home to about 1000 Armenians including clergy and seminarians. 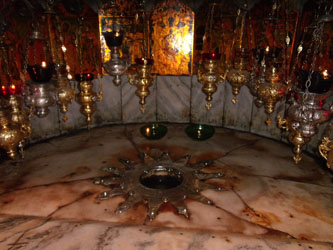 As a pilgrim in the Holy Land, I had the opportunity to live and witness first hand many of the sacred Biblical sites, the birthplace of Christianity where our Lord Jesus Christ was born, baptized, the towns where he taught his ministry, gathered disciples, performed miracles, was crucified, resurrected and spread the word of God around the world through his disciples. 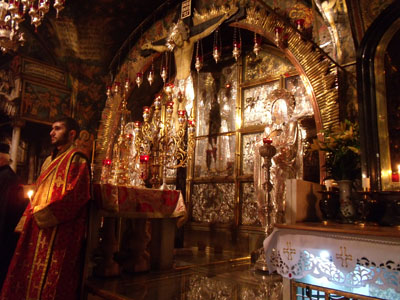 The Holiest and most sacred Christian site in the world is found within the Church of the Holy Sepulchre where Jesus’ Holy Tomb is located right in the heart of the Christian Quarter ofJerusalem. This is where Jesus was buried for 3 days right after his crucifixion and before his glorious resurrection on Easter. Inside the Church of the Holy Sepulchre is also where MountGolgotha is located where Jesus was beaten and crucified. 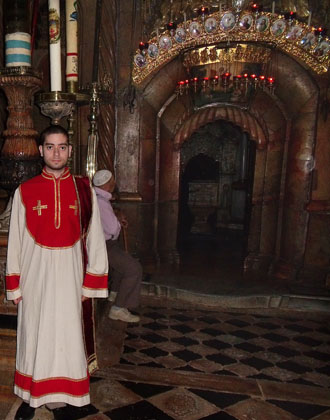 About half an hour away from Jerusalem, I was able to visit the Church of the Nativity inBethlehem near Manger Square in Palestine, where Jesus was born 2000 years ago. Other significant sacred sites in the Holy Land include; St James Armenian Cathedral in the Armenian Quarter, the Garden of Gethsemane, Mountain of Olives, the Virgin Mary’s Tomb, Mountain of Ascension (Hamparsman Ler – where Jesus ascended to heaven 40 days after his resurrection), Mountain of Temptation in Jericho (Porsutian Ler – where Jesus was tempted by Satan after fasting for 40 days in the desert during Lent), The Jordan River, The location of the Last Supper, City of Nazareth, Via Dolorosa, Tiberias, the Sea of Galilee, Monastery of Tabgha,  Capharnaum, Mountain of Beatitudes, and the Monastery in Cana just to name a few. 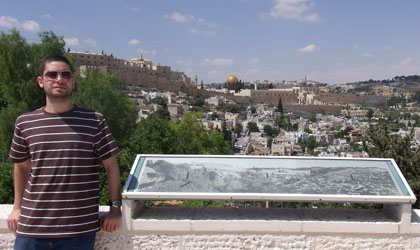 Of the holy sites listed above, there are two places that touched me the most. The first was the Holy Tomb of Jesus in the Church of the Holy Sepulchre. As a Deacon I was allowed to participate in an Armenian Church service at 4am in the morning right in front of the Tomb. It was such a special and peaceful moment in my life to be inside the House of God standing only a few steps away from Jesus’ Holy Tomb, and Mount Golgotha all under one church. It’s very difficult to describe my feelings when I was praying during the service with the amount of Divine power that is present around me, which was truly something special to witness and be part of.

The second place that touched me the most was in Capharnaum near the shores of the Sea of Galilee, where Jesus first met St. Peter and called him to become his disciple. As I was walking around the ruins of the old town of Capharnaum, I felt like I was reliving that same Biblical event when Jesus was calling Peter to follow him, but at the same time I felt like I was being called upon as well. I sensed this unusual power while I was around the ruins of Capharnaum, as if the ruins of this town and the Sea of Galilee was talking to me. 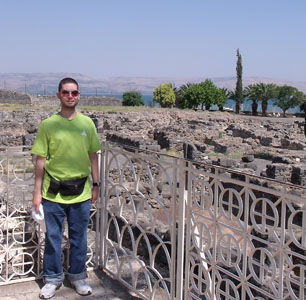 I also had a special chance to have a brief meeting with His Beatitude Archbishop Torkom Manoogian – Armenian Patriarch of Jerusalem. He talked a bit about the importance of serving the Armenian Church, and shared a few brief stories of his leadership experiences when he was Primate of North America. My meeting with the Patriarch was very meaningful for me, and I felt very privileged being allowed to have a moment to speak with one of the oldest and most experienced inspirational Armenian Church leader of our times. 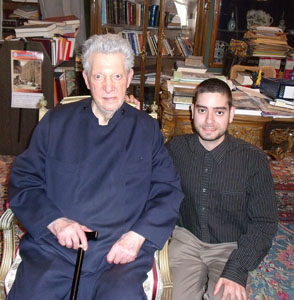 In a separate meeting with His Eminence Archbishop Nourhan Manoogian – Grand Sacristan of the Armenian Church of Jerusalem, he said that “The Armenian Church has a world population of followers of about 8 million people, the Orthodox Church has about 300 million followers, the Roman Catholic Church has over a billion followers, yet each of the 3 churches own equal share of the rights and privileges to all Christian Holy Sites, plus the Armenian Quarter – which fully belongs to us.” For these reasons I was ever so proud to be part of our glorious and victorious ArmenianApostolic Church, because this is truly a big accomplishment.

However, we must understand the value and never take for granted of these rights that we currently have, because earning and maintaining them unfortunately didn’t happen overnight, nor was it easy. I have nothing else but praise for the Armenian clergymen and the families living inJerusalem for their hard work and their centuries old struggle that they constantly face everyday living in Israel as an ethnic minority to preserve our church privileges.

I once again recommend that every Armenian visit and discover the hidden treasures of our Armenian heritage in the Holy Land, at the same time strengthen our faith and connection with God and to assist our fellow Armenians living in Jerusalem.