Meeting with the Minister of Immigration Refugee & Citizenship of Canada

Meeting with the Minister of Immigration Refugee & Citizenship of Canada

July 15th was an important day for Armenian Family Support Services. AFSS was invited to meet with the Honourable John McCallum, Minister of Immigration, Refugees, and Citizenship, at a roundtable event entitled Canada’s Continuing Story of Immigration – The Next Chapter.  The purpose of the event was to exchange opinions about the long-term stance of Canadian Immigration.

Minister McCallum conducted these round-table conversations with various Sponsorship Agreement Holders, settlement agencies, employment agencies, and university researchers from across Canada in order to gather various perspectives about the future direction of the IRCC. It was a great achievement for AFSS to take part in this conversation.

Since the first newcomers arrived on Canadian soil, a sense of possibility, innovation and discovery has been a defining part of our Canadian national identity. Although times and conditions may have changed, the 21st century newcomers to Canada have retained that innovative spirit, enriching the communities where they settle and helping to ensure the future of Canada to remain as dynamic as it was in the past.

The Government of Canada is asking Canadians coast to coast to help write the next chapter of that story. Our Government is committed to an immigration policy that supports diversity for the purpose of strengthening the fabric of our society and our economy.

Approximately 20 people attended the meeting from different agencies along with two MPs from Scarborough and 10 observers. Some of the topics of discussion at the roundtable focused on immigration levels as an annual target or more as a long-term plan. Another matter was the different categories of immigrants to Canada such as refugees, highly educated professionals, economic immigrants, etc.  Many topics of common concerns were discussed, specifically around family reunification, integration, mental health, etc.

A representative from the Armenian Community Center had the opportunity to deliver a presentation.

During the round table discussions, I contributed the following thoughts:

Integration is a pivotal factor, it is great to increase the levels of immigration as we are faced with an aging population; however, we need to integrate newcomers quickly and more efficiently so that we can see higher returns on investment.

With regard to employment, I pointed out that based on our stats from Syrian Armenian refugees, a good 30% are jewelers. This occupation has limited prospects in today’s Canadian job market.  Hence there is a need to retrain and reposition this segment.

With regard to mental health, I gave the example that at AFSS we send buses funded by private donors to bring the newcomers to our bi-monthly support circles where we talk about stress, mental health, and other concerns. The refugees tell us that they urgently need employment before anything else. So this goes back to the importance of providing funding to employment agencies that deliver results as opposed to just showing the number of clients that pass through their doors.

At the end of the meeting, I introduced myself to Minister McCallum and thanked him for including us.  I invited him to attend our upcoming Thanksgiving dinner for the Armenian refugees in order to promote the Canadian culture and values. He said YES!!  This will be a huge milestone for Armenian Family Support Services. We will gain exposure at IRCC.  In addition, we will be encouraged and motivated to launch a true Canadian Thanksgiving ceremony for our Armenian refugee families. 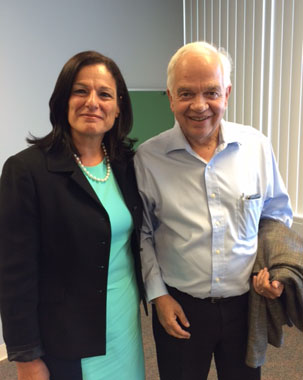