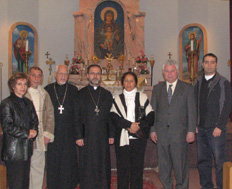 On Wednesday, October 29, 2008 the pastor, Rev. Archpriest Zareh Zargarian, Rev. Archpriest Sarkis Gulyan, the office staff and volunteers present at the Holy Trinity Armenian Church were excited and happy to have Mrs. Rakel Dink who came to visit us during the day, just hours before her public appearance for a lecture at the church “Magaros Artinian” hall scheduled to take place in the same evening.

After shaking hands and greeting Mrs. Dink, Fr. Zareh invited all present to take part in a prayer for the departed soul of late Hrant Dink.
S-IMG_8668b.jpg
Having her with us right there, praying and thinking about everything she and her family have been through was emotional and intimate.

We were all impressed by the strong faith of Rakel Dink who after all praises our Lord, believing strongly that Hrant got his final rest and peace embraced by God in his eternal life.

Mrs. Dink was moved to learn about the memorial days organized at Holy Trinity in honor of Mr. Dink’s passing and his first year anniversary. Also in his memory, the “Pokrig Pem” Theater Group of Holy Trinity Armenian Church was renamed to “Hrant Dink Pokrig Pem”.

These are only small ways to keep Hrant Dink’s memory alive but most important is for every Armenian to follow his legacy even in the most challenging times and not to surrender under any circumstances. As she mentioned during her speech in the evening, “In Turkey it is difficult to stand up for justice and equality, even more difficult if you are an Armenian in Turkey and trying to do that. Our best wishes and prayers go to the Dink family and their friends in Turkey.