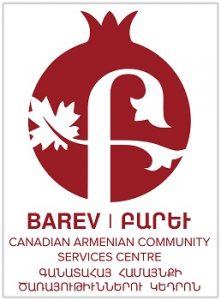 Transforming visions into a tremendous reality requires an unshakable faith, effort and devotion. When the primary goal of a vision is to serve and contribute towards the strengthening of the relations between Homeland and Diaspora, that vision becomes a mission. This mission of providing cultural, educational, social and humanitarian services to the community has been the vision of the Founder and President of the Center, Rev. Archpriest Fr. Zareh Zargarian, Vicar of the Armenian Church Diocese of Canada, with the participation of group of young members. On Sunday, October 15, 2017, the community members were joined on the inauguration of the Canadian Armenian Community Services Centre, a not-for-profit, known as “Barev” Centre, which took place at the Holy Trinity Armenian Apostolic Church, under the auspices of His Grace Bishop Abkar Hovakimian, Primate of the Armenian Church Diocese of Canada.

The Divine Liturgy was celebrated by Rev. Archpriest Fr. Zareh Zargarian. The Board of Directors of Barev Centre along with the volunteers were invited to the Holy Altar and wer 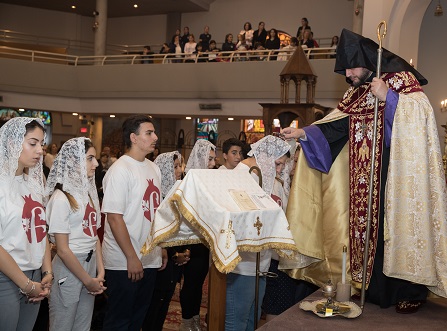 Next, Ambassador, Mr. Levon Martirosyan, read the decree of the President of the Republic of Armenia, Mr. Serzh Sargsyan, and awarded Deacon Berc Luleciyan with the Medal of Gratitude for his services to Armenia, Artsakh and the Armenian Army. 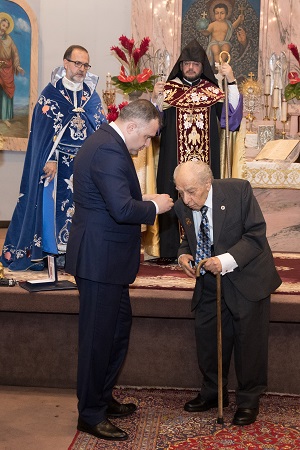 Following the reception, the ribbon cutting ceremony to celebrate the opening of Barev Center’s office took place by the sponsor, Miss Elizabeth Diradour, in memory of her brother and parents, Gregory K. Diradour, Suren and Azniv Diradour. Fr. Zargarian explained to the guests the specifics of Barev Centre’s logo which consists of a pomegranate in the centre of which the Armenian letter “B” for “Barev” is placed. “Barev” means “Hello” in Armenian. He further expressed his gratitude to the members of Barev and volunteers who helped with their unwavering support.

The guests were then directed to the “Magaros Artinian” hall, where over 300 attendees greeted them with standing ovation, followed by the anthems of Canada and Armenia. The students of grades 6 to 8 of St. Sahag and St. Mesrob Armenian Saturday School, under the direction of Mrs. Nata Navasardyan, kicked off the festivities with their performances of beautiful, inspirational and patriotic Armenian songs.

The Barev Centre’s Chairperson, Mr. Levon Kaltakdjian and Secretary, Sara Shahmuradyan welcomed the attendees and expressed heartfelt appreciation to all those who contributed to the success of the event, in particular, to sponsor, Miss Elisabeth Diradour. The introduction of the Barev Board of Directors was then followed with the screening of Barev’s first animated video which was created by youth members and in turn delighted the attendees. The program continued with “Sassoun” Dance Ensemble showcasing “The Dance of Kintos” and receiving a warm applause from the attendees.

Fr. Zareh Zargarian was then invited to deliver his message, during which he emphasized that “For centuries, the Armenian Church has been preserving and promoting not only our Christian faith but also the Armenian language, literature, culture, national identity and values. As a result, today, under the auspices of the Holy Trinity Armenian Apostolic Church, Barev Centre is a natural expression of our Church’s national mission.”

In his speech, Bishop Abkar Hovakimian, remarked that Barev Center’s aim is to strengthen the relation of Canadian Armenians with their roots while with the help of community members the center will become a remarkable fragment of the multicultural mosaic of Canada.

In his remarks, the Ambassador of Armenia, Mr. Levon Martirosyan expressed his delight on Barev Centre’s initiative and underlined his belief in the mission, noting that the Center will be successful in the implementation of its programs.

The Mayor of Toronto, His Worship John Tory, the Education Minister of Ontario, Hon. Mitzie Hunter, Honourable Member of Parliament, and John McKay, each in their turn praised the Holy Trinity Armenian Apostolic Church for providing educational, cultural, social and especially humanitarian services to the community. The honored guests expressed their joy on Barev Centre’s launch, indicating that the above-mentioned work is the continuation and enlargement of the process that leads to the success of Canada as a country. 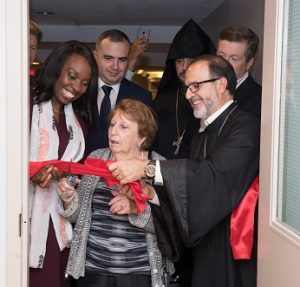 The event came to its end with the distribution of the auction and gift items, after which the volunteers were invited to the stage for recognition.

Extending best wishes to Barev Centre for a fruitful and exciting journey. 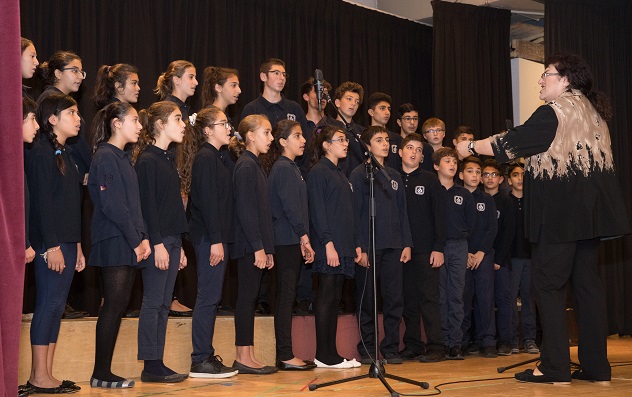 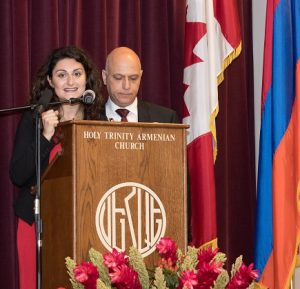 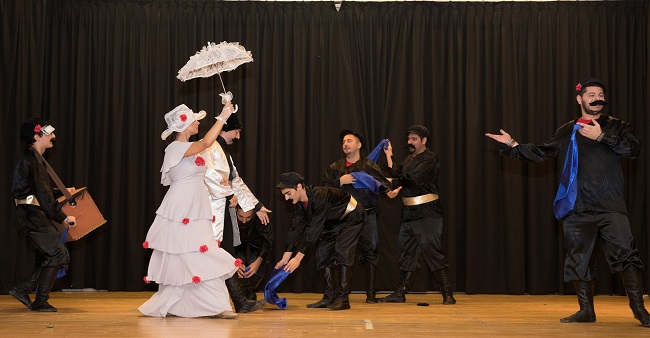 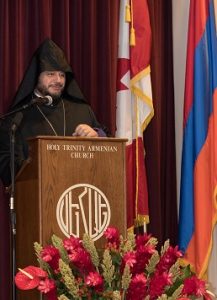 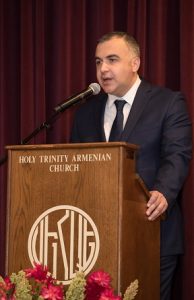 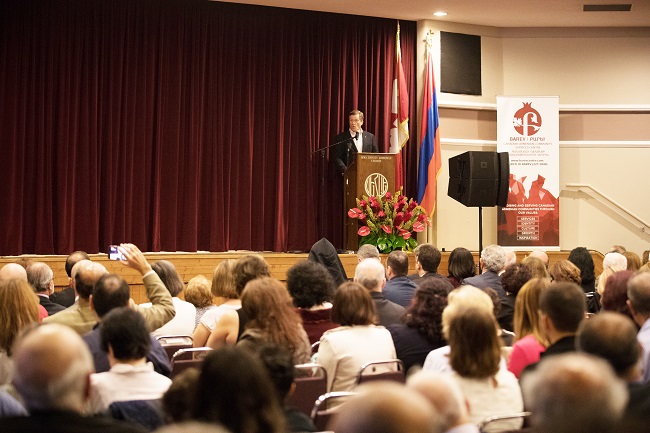 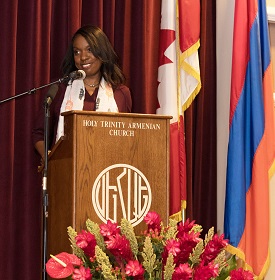 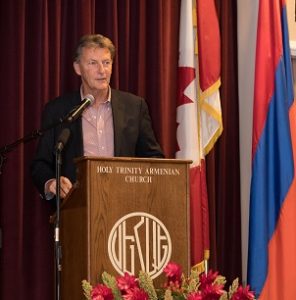 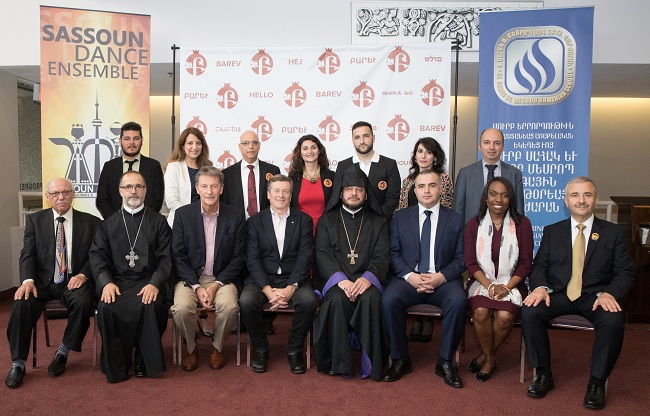 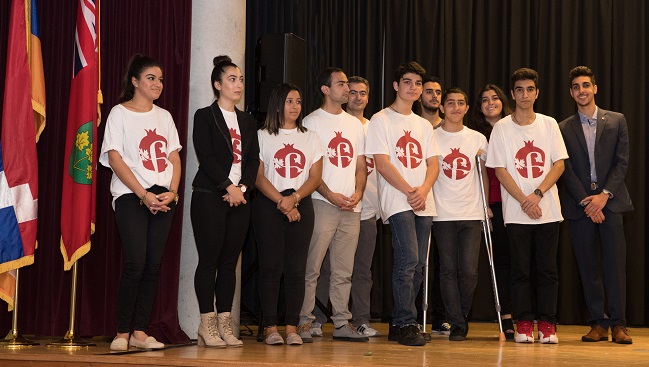