Nayiri Tavlian, President of Hay Doun and Narod Odabasiyan, General Director, discussed in great length the role that Hay Doun plays during the process of bringing Armenian Syrian refugees to Canada, and the responsibilities of the sponsoring families in greeting their family members in Montreal. They explained the changes in sponsoring Syrian refugees and answered frequently asked questions including why a family would be denied entry into Canada or why their application might be delayed.

At the end of the presentation, Father Zareh Zargarian thanked all members of Hay Doun for their hard work and helping Syrian Armenian refugees escape war torn countries. He closed the session with a prayer. Everyone expressed their gratitude to Hay Doun for the tremendous humanitarian work they do. Families were excited about the new arrivals in the next few weeks.

Light snacks and coffee were served as family members got the opportunity to speak with the members of Hay Doun to discuss their personal situations in depth and to have their questions answered.

Hay Doun Family Support Services, a sister office of Armenian Family Support Services, is a non-profit organization providing family and individual support services in Montreal, Quebec. Their services range from Family and Youth Support to Immigrant and Refugee Resettlement Services to Advocacy and Mediation. We look forward to continued efforts and success in assisting our fellow Syrian Armenians. 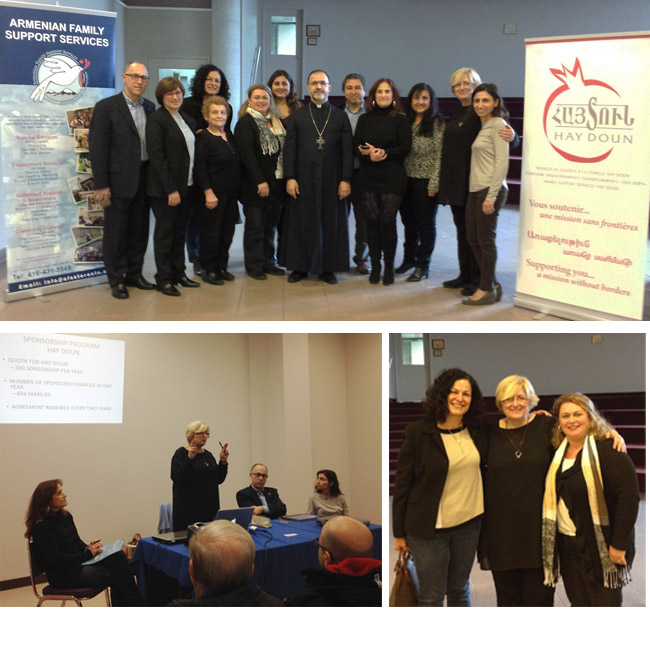