Toronto, Ontario – Through the organizational leadership of the Greek Orthodox Metropolis of Toronto (Canada) and the guidance of His Eminence Metropolitan Archbishop Sotirios, a productive meeting was held on December 2, 2011 between clergymen of the Eastern Orthodox and Oriental Orthodox Churches in Canada and the Honourable Jason Kenney, Minister of Citizenship, Immigration and Multiculturalism. 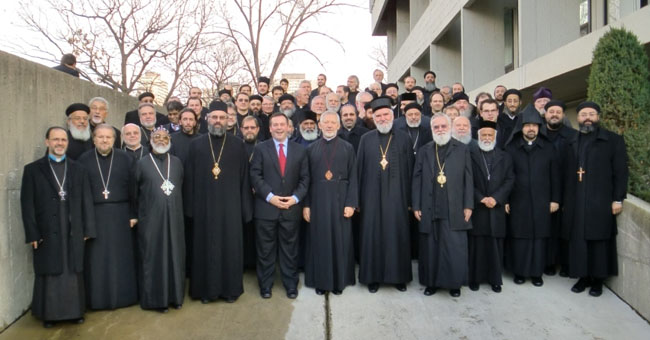 The discussions centred around the issue of religious freedom both in Canada and around the globe. Examples given consideration included Egypt’s Coptic Christians, the situation of the Ecumenical Patriarchate, the issue of confiscated Armenian Churches in Turkey, the problems facing Christians in Kosovo, the illegal occupation of Cyprus and others.

More than 80 clergy including four hierarchs participated in today’s conference. Delegates from the Orthodox Church (Greek, Serbian, Romanian, Ukrainian, Russian, Bulgarian and Canadian) were in attendance, as were representatives from the Oriental Orthodox Church (Coptic, Armenian, Syriac, Malankara (Syrian) and Ethiopian).

Minister Kenney spoke on religious freedom-related issues and participated in a roundtable question and answer session where he reaffirmed the federal government’s commitment to foundational values such as freedom, democracy and human rights.

“The establishment by the federal government of the Office of Religious Freedom is a welcomed and positive step to protect religious minorities under threat throughout the world,” said Metropolitan Sotirios. “It is by way of open and honest dialogue that we can continue to strengthen and promote tolerance and oppose religious hatred wherever it may occur.”

This meeting allowed participants to share information with the Minister and receive feedback on federal initiatives to build on the strong relationship between the Churches and the federal government as they work together to help persecuted religious communities and individuals.