On Easter Sunday, April 16, 2017 The Rev. Archpriest Fr. Zareh Zargarian, Vicar of the Armenian Church Diocese of Canada and Parish Priest of Holy Trinity Armenian Church of Toronto celebrated Divine Liturgy assisted by Rev. Fr. Datev Menengichian and The Rev. Archpriest Fr. Sarkis Gulyan. Accompanying the Liturgy were the Deacons, Sub Deacons and the Choir. The Easter message of His Holiness Karekin II, Supreme Patriarch and Catholicos of All Armenians was read by Fr. Zargarian.
At the end of liturgy, parishioners that are carrying the names Harutyune, Harout, Artin and Zadig were invited to Holy Altar and were blessed and congratulated by Fr. Zargarian. 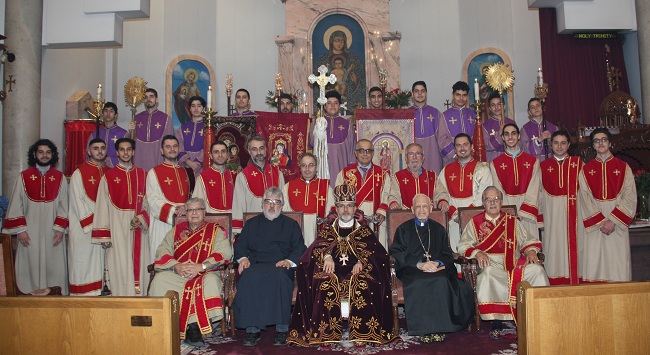 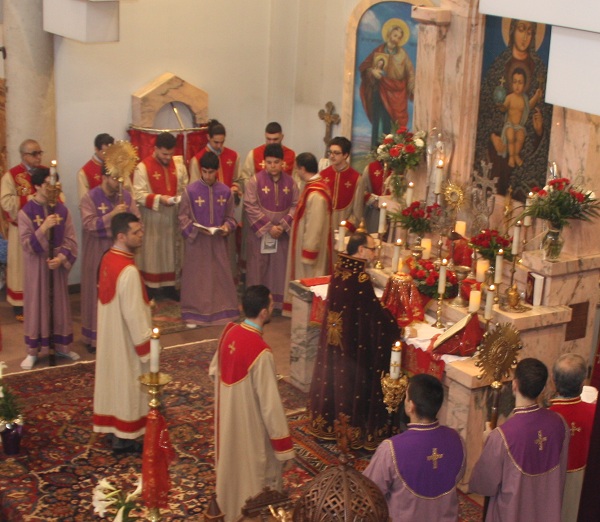 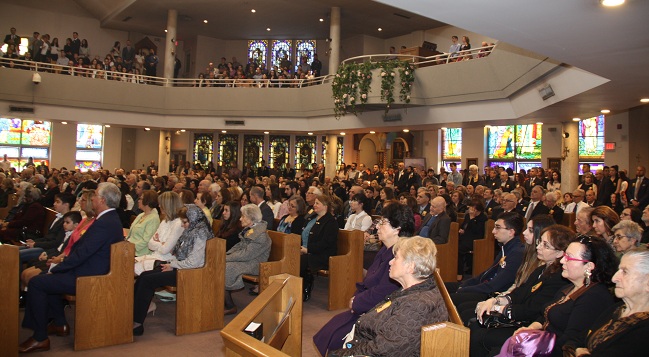 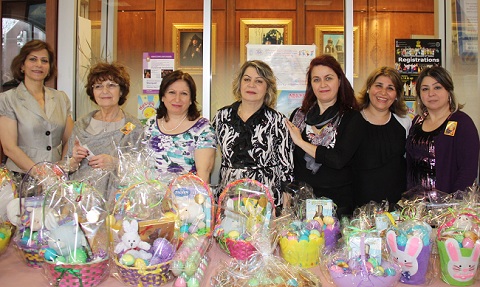 The Feast of the Glorious Resurrection of Our Lord Jesus Christ or the Easter Feast is one of the five major feasts of the Armenian Church. The main origin of the feast is the following.

Following the crucifixion and death of Jesus Christ His body was taken off the cross and placed into the tomb and the entrance to the tomb was closed by a large stone and the soldiers were ordered to control the entrance to the tomb. After three days the three women, who had followed Jesus from Galilee, Mary Magdalene, Mary, the Mother of James and Joseph, and the wife of Zebedee brought spices and perfumes to anoint the body of Jesus. They found the stone rolled away from the entrance to the tomb, so they went in but they didn’t the body of the Lord. They stood there puzzled about this, when suddenly two angels dressed in white appeared and said to them, “Why are you looking among the dead for one who is alive? He is not here, ha has been raised” (Lk 24:5-6). The women returned from the tomb and told all these things to the eleven disciples and the rest. According to Peter more than 500 people saw Christ who had risen from the dead. So, this is the evangelical tiding of the fact of Easter or Holy Resurrection.

Resurrection of Christ became the basis of the Christian doctrine and faith. “If that is true, it means that Christ has been raised from death, then we have nothing to preach and you have nothing to believe” (1 Co 15:13-14).

Christ rose from the dead, by means of His Death He destroyed Death and granted eternal life. “I am the Resurrection and I am the Life. Whoever believes in me will live, even though he dies; and whoever lives and believes in me will never die” (Jn 11:25).

Christ died for the salvation of mankind and by His Blood took away the sin in the world, so that we should inherit eternal life.

On the day of the Easter feast people dye eggs red as a symbol of fruitful life, salvation and joy. St. Gregory of Datev considers the egg to be the symbol of the world, the shell of which is the sky, the membrane is the air, the white is the water and the yolk is the earth. Dyeing eggs red symbolizes the salvation of the world by means of Blood of Christ.

The Armenian Church celebrates the Easter Feast on the first Sunday following the full moon of the vernal equinox, with 35 days moveability, during the period from March 21 –April 26.

The Armenian Church traditionally celebrates evening Divine Liturgy on the evening prior to Jesus Christ’s Glorious Resurrection (Easter). Following the conclusion of the Liturgy, the assembled faithful take lit candles home, symbolizing the Light that Christ brought into the world. The Divine Liturgy celebrated on the eve is the start of the festive ceremonies.

On Sunday, the day of the feast, a morning service is conducted the Andastan Service is performed wherein the four corners of the world are blessed, afterwards the Divine Liturgy is celebrated. That day the faithful welcome each other on the occasion of the Glorious Resurrection of Christ conveying the great tiding:  “Christ is Risen from the dead” and receive the answer: “Blessed is the Resurrection of Christ.”

Fifty-day period beginning from the Easter Feast – the Holy Feast of the Glorious Resurrection of Our Lord Jesus Christ – and lasting till Pentecost in the Holy Armenian Apostolic Church is called Hinounk or Hinants period. That period is dedicated to the mystery of Resurrection of the Lord, and that is why it is Dominical period.

The name “Hinounk” comes from the word hisuonk (fifty). The first forty days of the period are dedicated to the appearings of Rosen Christ: “For forty days after his death he appeared to them many times in ways that proved beyond doubt that he was alive. They saw him, and he talked with them about the Kingdom of God” (Ac 1:3).

The last ten days of the Hinants period are dedicated to the Ascension of Christ.

Hianats period is concluded with the Feast of Ascension. According to the Church laws there are no fasting days during all fifty days of Hinants period, which means that all people can eat everything during that period.