Several issues relating to the mission of the Armenian Church Diocese in Canada were discussed. The principal deliberation of the meeting was the major initiative of the Laval Armenian Community’s plan for the new Church and Community Centre, and also the upcoming youth pilgrimage to the Armenian Jerusalem. 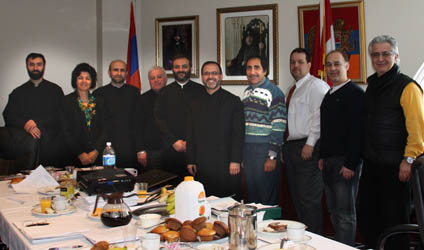 Members also spoke about the organizational work of the 2010 Diocesan Annual Assembly that is scheduled to take place during the last weekend of May in St. Mary Armenian Church of Hamilton.

Mr. Shahin Soheili made a presentation on the new by laws, directives received from the Mother See of Holy Etchmiadzin. In addition, an important item on the agenda for this meeting was the Christian Education and Youth Ministry Department and its mission, CYMA 2010 which the Diocese of the Armenian Church of Canada highly supports. The meeting also reviewed the current financial position of the Diocese.