By the invitation of Rev. Archpriest Fr. Zareh Zargarian, pastor of Holy Trinity Armenian Church, engaged couples took part in Divine Liturgy on February 1, 2015, on St. Sarkis Day celebration. Following the annual tradition, the couples were invited to the Holy Altar and received special blessing. It was a beautiful, heartwarming ceremony. Verses from 1 Corinthians were read by Davit Kara-Yacoubian.

Fr. Zargarian acknowledged the presence of Mr. Jim Karigianis*, at the Divine Liturgy, and on behalf of the church parishioners and community members expressed heartfelt appreciation for the support he has shown to Armenian cause over the years and his role in recognition of the Armenian Genocide by the government of Canada.

Fr. Zargarian also invited those who carry the names: Sarkis, Sergio, Serj and Sako to be blessed on this feast day of Saint Sarkis.

Following the Divine Liturgy, the couples gathered at the church boardroom for light refreshments and had a chance to meet one another. They received well wished comments, advice and words of encouragement from Fr.Zargarian and Mrs. Calabrina Boyajian. 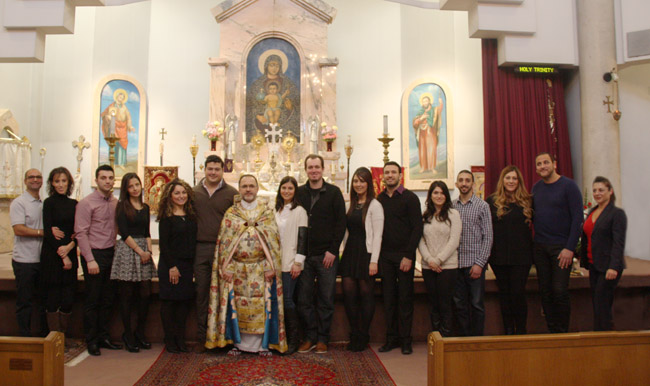 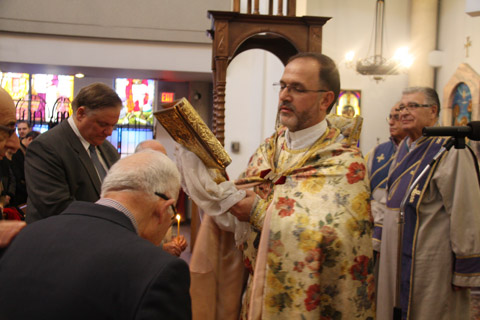 In Armenia it is accepted to celebrate the Feast of St. Sarkis not only according to church rites and prayer, but also according to various folk traditions. St. Sarkis the Captain is the patron of youth. Many miracles happen thanks to his intercession. On the day of the feast young people pray the saint asking him to make their prayers audible to God. St. Sarkis is the realizer of the love longings.

Fast of Catechumens established by St. Gregory the Illuminator precedes the feast. On the eve of the feast, in the evening, young people eat salty cookies and relate the appearance of their future bride or bridegroom in their dream to eating of the salty cookie. Also, on the night preceding the feast of St. Sarkis the faithful people place a tray full of gruel before the door believing that while passing near their door at dawn St. Sarkis will leave his footprint on the gruel symbolizing the fulfillment of their dreams.

People in love present each other cards, flowers or sweets on the occasion of the feast.

*In 2014 Mr. Karygiannis was awarded The Mkhitar Gosh Medal’ from the Government of The Republic of Armenia for his substantial input in international recognition of the Armenian Genocide. In 2014 he received the ‘25 Year of Karabakh Movement’ Gold Medal by the Government of The Nagorno-Karabakh Republic as the first Canadian to visit the Republic in 2012 to observe the Presidential Elections.