On Saturday March 13, 2010, a busload of Women from Holy Trinity Armenian Church travelled to our sister parish of St. Gregory the Illuminator in St. Catharine’s for the annual celebration of Armenian Women’s Day.  The event was organized by Women’s Guild Central Council and hosted by the Women’s Guild chapter of St. Catharine’s. 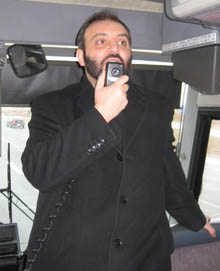 It was a full day!  On the road, all the travellers/pilgrims were treated to an informative, interesting impromptu Bible and Armenian history study by our Primate, His Eminence Bishop Bagrat Galstanian, who also led group singing in the bus.

Once we arrived at St. Gregory, all were ushered into the church sanctuary where joined local Armenians and took part in the beautiful “Arevakal” Lenten service.  Attending Bishop Bagrat were Der Datev Menengitchian, Pastor of St. Gregory, Der Parsegh Vanlian, resident of St. Catharine’s and visiting Pastor of St. Mary in Hamilton, and local Deacons Harry Minoian and Albert Amato. 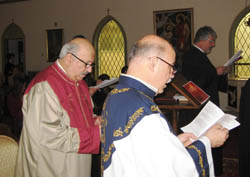 After the service all present were invited into the parish hall for lunch and cultural program, which was opened with prayer and invocation led by Bishop Bagrat.  The program included:

A beautiful video presentation of the 2008 Holy Miuron consecration in Etchmiadzin followed, after which the program was closed with benediction recited by Der Parsegh. 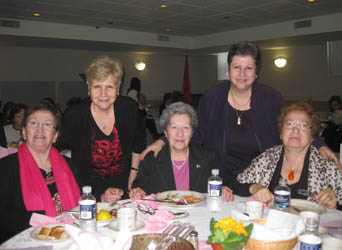 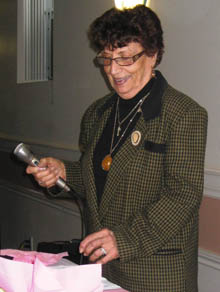 The Central Council members entered into a closed meeting along with clergy and host chapter members, and the Toronto crowd were driven around the Golden Horseshoe farmlands to Niagara-on-the-Lake and back until the designated departure time.

Although the weather outside was soggy, the spirits of the women were high!