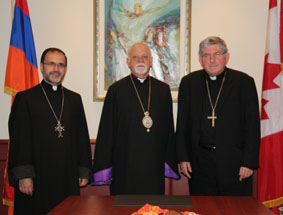 On Thursday, September 23, 2010, the Archbishop was welcomed at Toronto’s Pearson Airport by Rev. Archpriest Zareh Zargarian, Mr. John Satouri, the Parish Council Chair and Mr. Ohan Ohanessian, the co-ordinator and head of the organizing committee and by other fellow parishioners.

The next day, upon the invitation of Fr. Zargarian, the Archbishop had a meeting with Rev. Dr. Karen Hamilton, the General Secretary of the Canadian Council of Churches, followed by another meeting with His Eminence Thomas Collins, the Archbishop of Toronto’s Catholic Archdiocese at the Holy Trinity Armenian Church.  The meetings took place in a loving atmosphere in which the parties renewed their commitment to help one another and to serve our Christian faithful whether it be in North America or the Middle East.

On Sunday, September 26, 2010, Archbishop Assadourian celebrated Divine Liturgy and delivered an inspiring message to a large number of faithful gathered for this special day.

After the Divine Liturgy, in honour of the Archbishop, an official banquet was held in the “Magaros Artinian” Hall organized by the Parish Council of the Holy Trinity Armenian Church and the Banquet Committee.

During this gathering, as a token of appreciation for more than 30 years service rendered to the Armenian community of Iraq and as the General Secretary of the Council of Christian Church-Leaders in Iraq, Fr. Zargarian presented a Canadian Native art craft to the Archbishop on behalf of the parishioners.

In his closing remarks, Archbishop Assadourian thanked Rev. Zargarian, the Parish Council and organizing committee, Ohanessian Family, Mr. & Mrs. Zakarian and Toronto Armenians in general for their warm reception and gave brief information about the Armenian Church and community in Iraq. 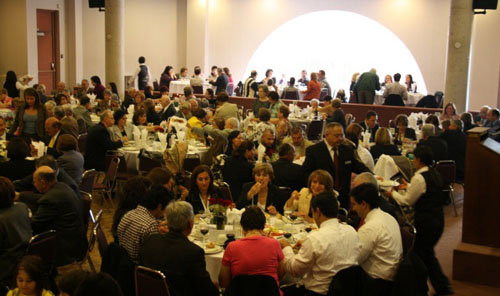