The weekend long anniversary celebration started with a  unique exhibition dedicated to the 85th  Anniversary of Holy Trinity Armenian Church parish in Magaros Artinian Hall. A large collection of photos, books, signs and much more carefully preserved over the last eight decades were displayed in this exhibition. Every corner of the the hall reflected on numerous memories of joyful times, milestone celebrations, accomplishments, and most importantly generations of Armenians gathered to pray, learn, teach and pass along the torch.

The opening ceremony took place on Saturday, December 7, 2013. Ms. Isa Basmajian welcomed the guests and shared memories in her opening speech. Archbishop Hovhanissian and Fr. Zareh Zagrarian also expressed their feelings on this joyous occasion. Wine and cheese was served to the guests and it was a pleasant nostalgic atmosphere. 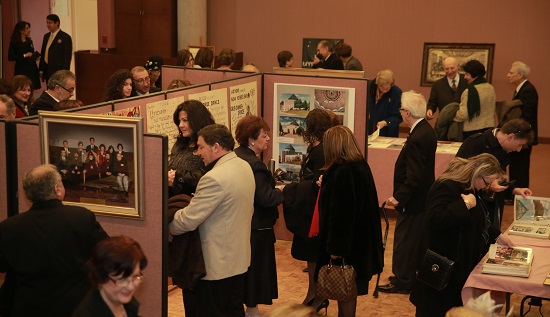 On Sunday, December 8, 2013 Holy Trinity Armenian Church was filled with congregation to celebrate the 85th Anniversary of the establishment of our parish in Toronto: a tremendous milestone and an occasion for us to look back in thankfulness and appreciation to God who has led our steps over the years. 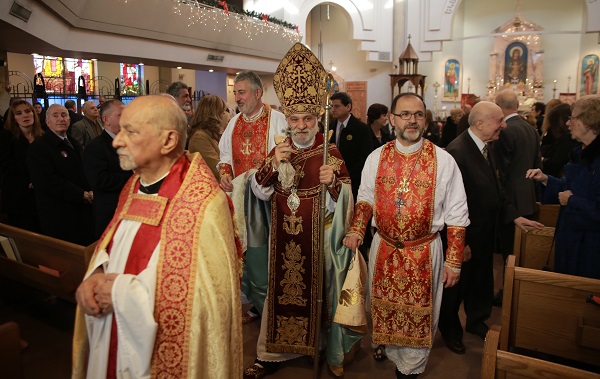 The Anniversary Banquet took place at the Armenian General Benevolent Union’s Babayan Hall with the presence of over 300 parishioners. The Master of Ceremonies for the day, Mr. Migirdich Migirdichyan, welcomed the following honorable guests at the head table: 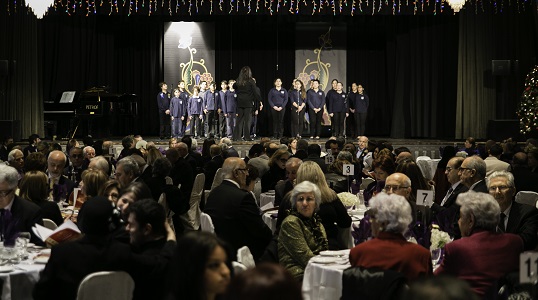 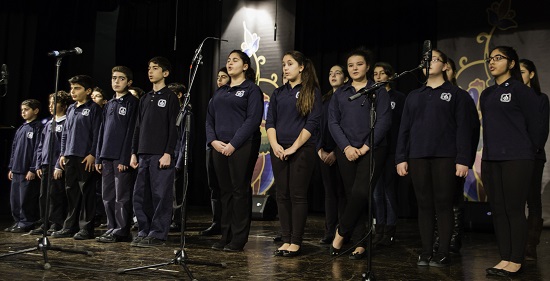 The event started with the National Anthems of Canada and Armenia as well as favorite folk songs performed by the students of grade 6, 7 & 8 of St. Sahag – St. Mesrob Armenian Saturday School conducted by Mrs. Nata Navasardyan.

After Mr. Migirdichyan’s welcoming remarks and introduction, Archbishop Hovhanissian blessed the meal. During the lunch, Ms. Ivetta Melkumyan skillfully played classical tunes on the piano which was appreciated by all. 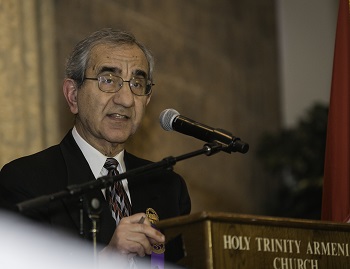 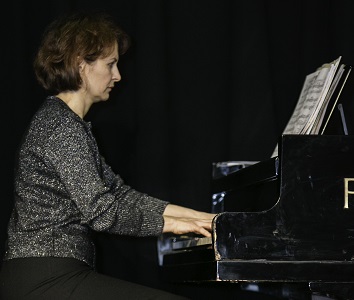 Mrs. Diana Bogosyan, the chair of the organizing committee extended her heartfelt congratulations and best wishes on behalf of the committee. 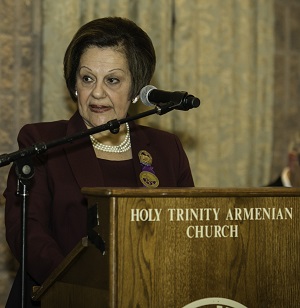 The Babayan Foundation’s president, Mr. Haig Selian, addressed the guests with a heartfelt and fatherly message and congratulations to all and praised Fr. Zareh Zargarian for the selfless services to his church over the years. 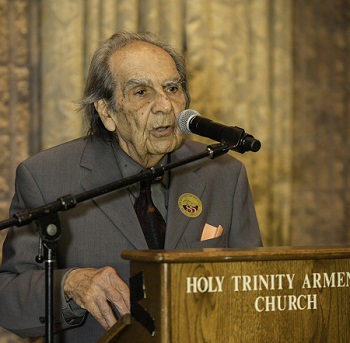 As a tradition of anniversary, the church auxiliary and committees presented their financial donations to the church treasurer, Mrs. Rosin Imasdounian, in support of maintaining the church mission, projects and costly maintenance of the building which was appreciated with great rounds of applause from the guests. Mrs. Jaklen Esagholian, expressed her words of congratulations on behalf of over 30 committees and auxiliary bodies of the church. 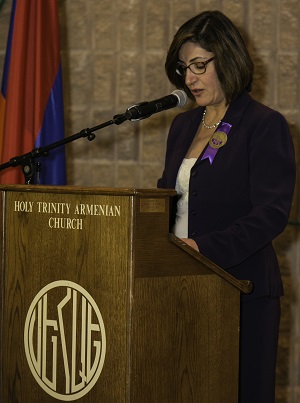 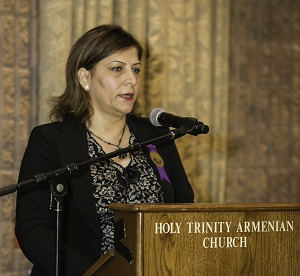 The Canadian born Armenian Priest, Fr. Harold Nahabedian extended his congratulations to parish priest and the congregation and shared his childhood memories. 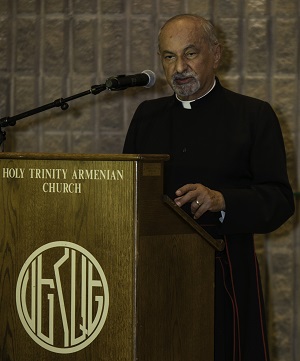 The organizing committee brought in the cake; the Anniversary Benefactors and God Fathers along with the head table guests were invited to join in singing the birthday tune. It was a true celebration of 85 years of commitment, love and serving.

Mr. Ohan Ohanessian, the Chairman of Parish Council welcomed all and expressed his sincere happiness on this wonderful occasion. Mr. Ohanessian recognized all Toronto Armenian associations who helped and supported with the 85th anniversary celebrations, especially to all members of the organizing committee under the leadership of Mrs. Diana Bogosyan. He thanked Fr. Zargarian, for his strong leadership, guidance and support as well as the united Parish Council who work tirelessly. 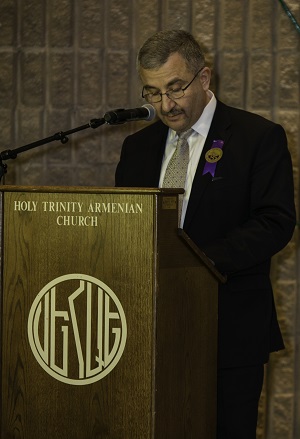 His Eminence Archbishop Hovhanissian, invited all to raise their glasses and join him in a toast to the wellbeing of His Holiness Karekin II Supreme Patriarch and Catholicos of All Armenians and to Mother See Holy Etchmiadzin as the center of the nourishment and faith of our community. 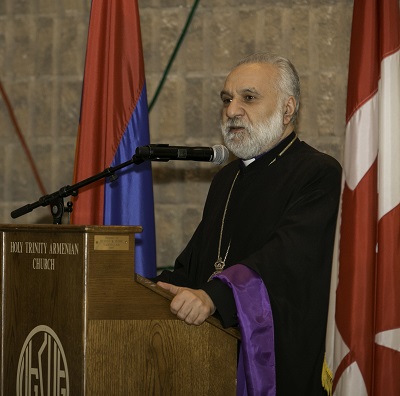 The next performance was amazing songs by vocal solo artist Miss. Ani Babayan accompanied by Ms. Ivetta Melkumyan on piano. 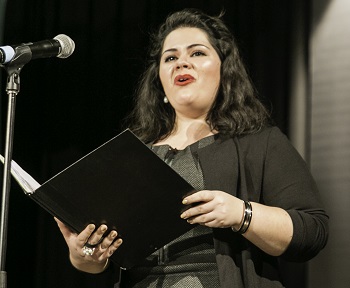 The Chairman of Diocesan Council, Mr. Ara Boyajian addressed the guests with a heartfelt speech, congratulating the Church Anniversary to all with warm wishes to the Pastor and Parish Council of Holy Trinity. 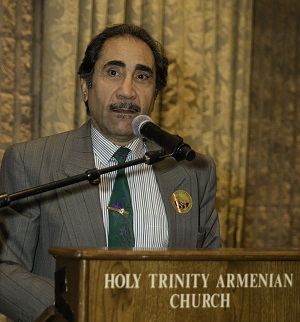 The series of wonderful performances that took place in Babayan Hall that day, continued by “Sassoun” Dance Ensemble of the church. Once again they brought great joy and delight to the audience by performing a number of Armenian folk dances. The group will be celebrating their 10th anniversary in 2014 with Artistic director and choreographer Mr. Joe Avakian. 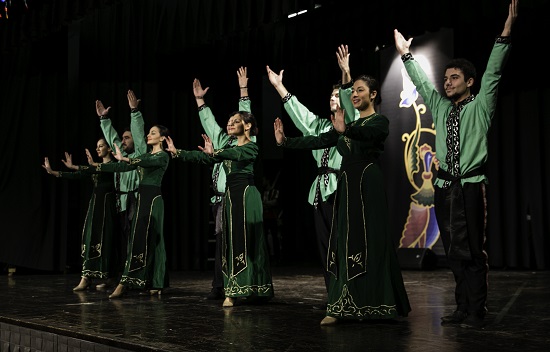 The Parish Priest, Rev. Archpriest Zareh Zargarian welcomed and appreciated the presence of the guests on this special celebration and thanked the leadership of the AGBU and particularly Mr. Berge Papazian. 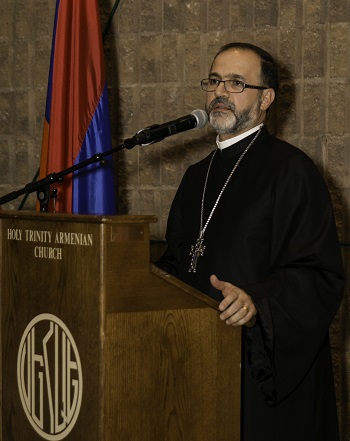 He acknowledged all members of the parish council lead by Mr. Ohan Ohanessian for their services to the church throughout the year, expressed his gratitude to the volunteers, past and present of Holy Trinity for their ongoing support and heartfelt work.

A special recognition went to Mr. Takvor Hopyan for his volunteer services in designing the current building and taking care of all details until this magnificent building was completed and consecrated in 1987. 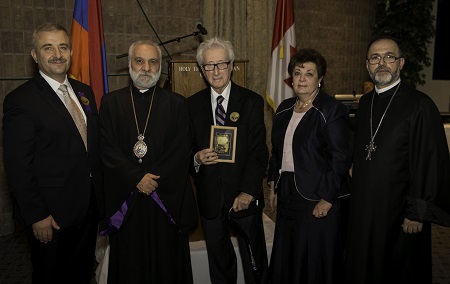 Fr. Zareh talked about the importance of goodness and forgiveness in order to reach to higher levels of accomplishments and better serving our Lord and quoted late Nelson Mandella: “If there are dreams about a beautiful South Africa, there are also roads that lead to their goal. Two of these roads could be named Goodness and Forgiveness.”

The award Ceremony is a tradition in this church. Although every single person volunteering their time and serving their church is highly appreciated but one award on each year is given to winners in five categories. 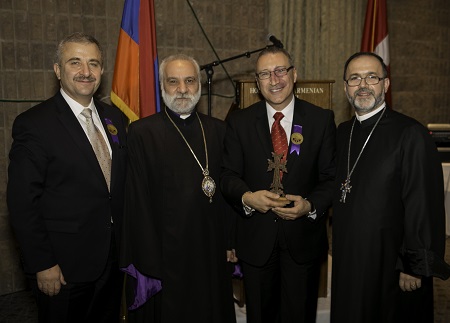 Fr. Zargarian invited all to join him appreciate the ongoing support and services of previous Parish Council members Mrs. France Kandaharian, Mrs. Talar Karabulut and Mr. Rostom Mirzoyan who finished their term in 2013. 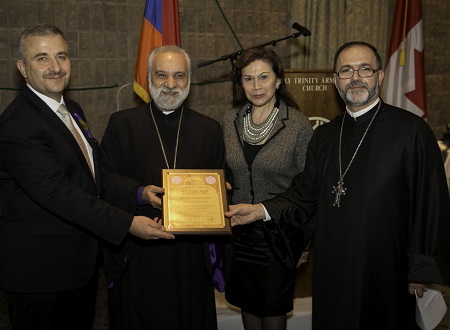 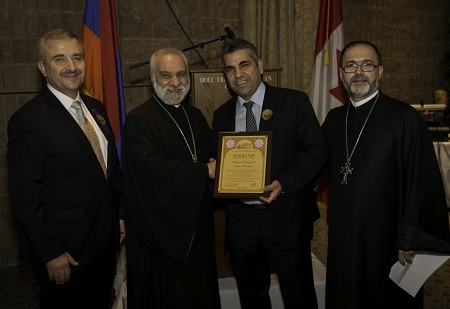 The Family of the Year Award was presented to Mr. & Mrs. Zadig & Nvart Mirzoyan and their family, who throughout the years attended and wholeheartedly served their beloved church. 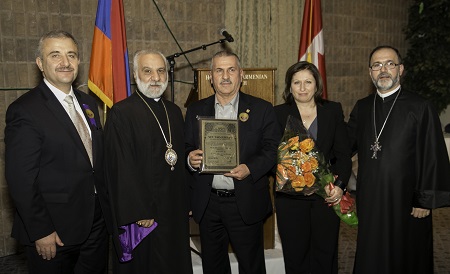 The Young Lady Award went to Miss. Alexia Citak, for her devotion and long years of service to Mario Gumushdjian Library and the Bible Study Group. 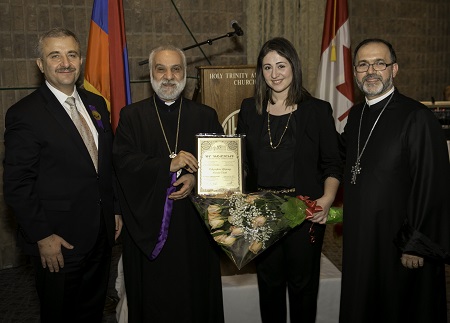 Nareg Zargarian received the Young Man of the Year Award for his long years of attendance in Sunday School, Saturday School, The ACYOC, Sassoun Dance Ensemble and serving on the Holy Altar as Sub-Deacon. 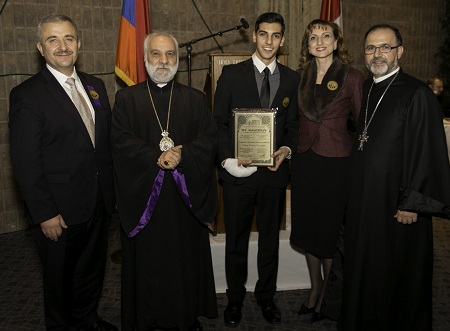 The Parish Council presented Yeretsgin Naira a bouquet of flowers as a token of appreciation for her supporting role over the years.

The Woman of the Year Award went to the longtime member of the Women’s Guild for her love and devotion to Church: Mrs. Ardemis Moushian. 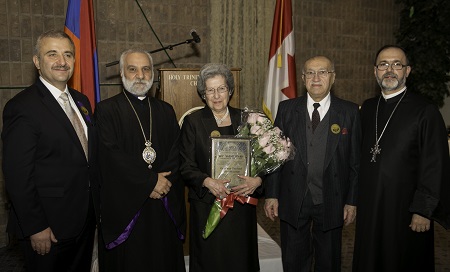 The Man of the year award went to Dn. Nurhan Ipekcyan for his years of serving on Holy Altar, training sessions for altar Boys and Sub-Deacons, attending services outside our church along with Fr. Zargarian or at times representing him and more. 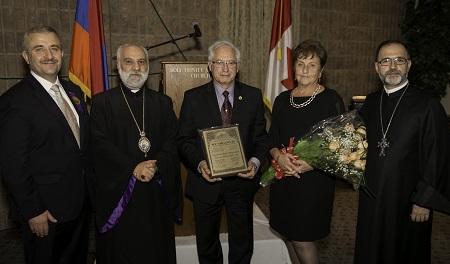 Rev. Archpriest Fr. Sarkis Gulyan’s long years of services to the Armenian Apostolic Church has been appreciated throughout years. On this anniversary celebration, Fr. Gulyan was invited to receive the highest order of the Holy Trinity Armenian Church, The Golden Cross. Unfortunately, he could not be present but Fr. Zargarian and Mr. Ohanessian will be visiting his residence to express gratitude and award him personally with the Golden Cross.

During his inspirational speech, Fr. Zareh expressed his gratitude to previous pastors and volunteers. In particular, he appreciated the First Primate of the Armenian Church Diocese of Canada, Late Archbishop Vazken Keshishian. His wholeheartedly appreciation was extended to his spiritual father and the devoted pastor of Holy Trinity Armenian Church who later became the Primate of the Armenian Church, His Eminence Archbishop Hovnan Derderian for his hard work and commitment. Fr. Zareh recognized His Eminence Bishop Bagrat Galstanian for ten years of dedicated services to Canadian Diocese and the Holy Trinity Armenian Church. 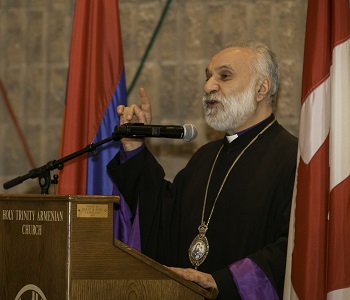 On behalf of the Holy Trinity Armenian Church faithful, Fr. Zareh, extended words of gratitude to His Eminence Archbishop Nathan Hovhanissian, for his leadership and care and invited him to deliver his heartfelt message. His Eminence congratulated all and started his heartwarming message by comparing the current faithful of the church to the Armenian family man who has for centuries even thousands of years set his mind on providing for the family and his offspring, constantly worrying about who would be there when he is gone… He concluded the affirmative message by reminding us that today’s success is the proof of generations who follow the footsteps of their ancestors who care deeply for their church, their second home and take great care to make sure it will be handed to their children and grandchildren of faithful ready to serve their Lord. 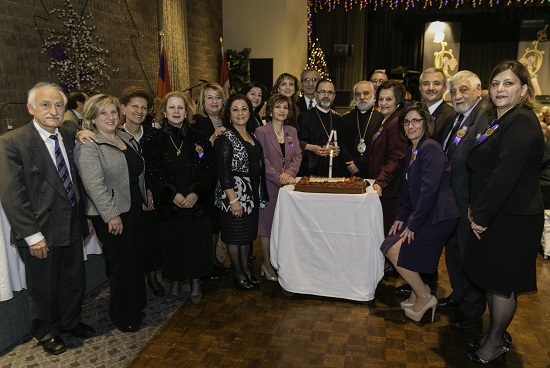 Let us remember the past, celebrate the present, and build the future. 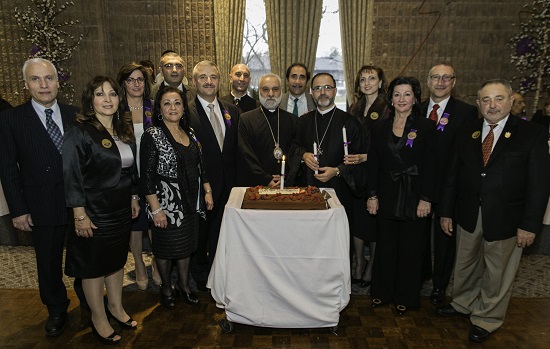