Armenian Family Support Services Celebrates 10th Anniversary With “A Night To Shine”
Saturday September 27, 2014 was a “Night To Shine” for Toronto’s Armenian Family Support Services (AFSS) as they celebrated their 10th Anniversary together with members of Toronto’s Canadian-Armenian community.  AFSS is a registered non-profit community organization and part of the Holy Trinity Armenian Church of Toronto. The organization provides emergency support, settlement and referral services for the Greater Toronto Area with a focus on Armenian Canadians.
The evening was full of fun and festivities. MP Roxanne James opened the program with praise for the work carried out by AFSS for the community. She brought greetings and read a message from the Honourable Chris Alexander, Canada’s Citizenship and Immigration Minister, congratulating AFSS for their 10 years of service. 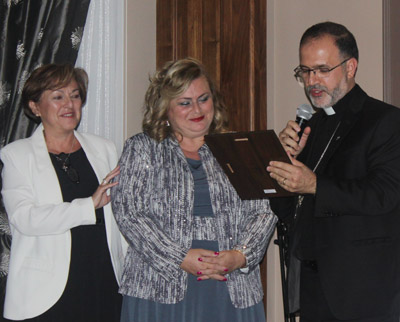 Mrs. Maida Icliates, chair of AFSS was recognized for her passionate dedication to the Armenian Community of Toronto by Reverend Archpriest Zareh Zargarian and Holy Trinity Armenian Church’s Parish Council with a commemorative plaque. Father Zareh thanked Maida for her leadership and unswerving dedication, saying that through her efforts, together with the AFSS Board of Directors and team of volunteers, she has shown the true meaning of what it means to be a Christian.

Master of Ceremonies was our very own Saro Khatchadourian, who skillfully hosted the evening’s events. In her speech, Maida spoke of the countless hours that the AFSS Board, volunteers and people in the community have given to create a tapestry of love and caring for those in need. She also thanked all those who contributed financially to help the numerous initiatives that AFSS has undertaken over the years. Mr. and Mrs Levon and Silva Mermer were presented with an award as an expression of appreciation for their ongoing and unconditional financial support to AFSS.  The program included a video presentation by a community member who had approached AFSS for financial help towards his tuition. A couple in the audience also spoke of their gratitude to AFSS for having been there for them when they first arrived in Toronto, helping them to settle into their new lives in Canada.

After dinner, guests were entertained by the graceful dancing of Mrs. Joy Bedrosyan and her dance partner Mr. Egor Shalvarov, as well as the lively music of Gary Sahsuvar’s jazz trio. DJ Armo Kidd kept the crowd dancing into the late hours of the night. Throughout the night guest enjoyed the Hollywood style step and repeat photo corner, complete with red carpet and velvet ties. Attendees paused to take many memorable photos with friends.  A silent auction and numerous valuable lottery gifts made the evening a resounding success!