95th Anniversary of the Armenian Genocide

95th Anniversary of the Armenian Genocide 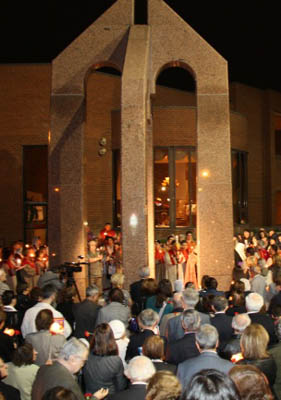 On Saturday, April 24, 2010, the Toronto Armenians gathered at the Holy Trinity Armenian Church to commemorate the loss of 1.5 million Armenian martyrs massacred in 1915.

The event was organized by the Interdenominational Committee of Toronto, under the auspices of Canada’s Armenian Apostolic, Armenian Catholic and ArmenianEvangelical Churches.
The Divine Liturgy celebrant was Very Rev. Fr. Meghrig Parikian, with the participation of the deacons, acolytes and the choirs of St. Mary’s, St. Gregory the Illuminator and Holy Trinity Churches.

Mr. Hagop Janbazian, the chairperson of the Interdenominational Committee, delivered the opening remarks, followed by Archpriest Zareh Zargarian’s welcoming message and invitation of the keynote speaker, His Eminence Bishop Bagrat Galstanian, Primate of the Armenian Church to deliver his message on this solemn occasion.

Mrs. Sona Hovsepyan’s mesmerizing voice as she performed “Dele Yaman” & “Grung, Kna” was the conclusion of the event inside the church.

The evening continued by a requiem service, followed by a candle-light vigil and placing of red carnations at the Memorial Monument located outside the church. After a group prayer and singing of the National Anthem of the Republic of Armenia, all present were invited to visit and support the art exhibition by a group of Armenian artists from Tbilisi and Javakhk.

The Women’s Guilds of the churches had prepared light refreshments for everyone at the church hall.