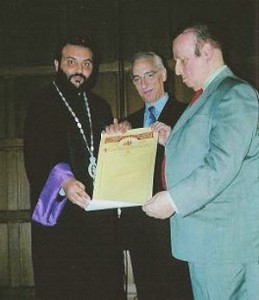 The Diocese of The Armenian Church of Canada honoured the Zoryan Institute on the occasion of its 25thAnniversary, in the Great Hall of Hart House, University of Toronto, on the evening of Saturday, October 7, 2006, with the participation of all Toronto Armenian organizations (religious, cultural, philanthropic and political) and over 225 friends of the Diocese and the Zoryan Institute from within and outside Canada.  They had all come to describe, convey or witness the well deserved accolades received by the Zoryan Institute and the driving forces behind the Institute for their achievements during the past twenty five years and expressed good wishes for continued success.

Motivated by a desire to document the Armenian Genocide, Mr. Greg Sarkissian was one of the founding members of the Zoryan Institute, which evolved into a world renowned center for the study of causes of genocides worldwide aiming to eradicate the repetition of such calamities anywhere in the world.  In line with its growth, the Institute is currently run by two boards of directors.  The Academic Board consisting of scholars well known in their fields conceptualizes and oversees the implementation of the Institute’s programs, which include book and journal publications, holding of international conferences, establishment of university study programs, providing scholarships, etc.  Whereas, the Corporate Board governs the Institute’s administrative, legal and financial affairs.

Mr. Berge Papazian, the MC of the evening, opened the event at 6:30pm by welcoming the guests and conducted the proceedings in a smooth and pleasant manner until 8:00pm when dinner was served as scheduled. Prior to dinner, Mr. Papazian invited notable individuals to the podium to address the audience.

The first speaker, Mr. Ara Boyajian, Treasurer of the Diocesan Council, in his opening remarks stated that the Nobel Peace Prize for 2005 was not solely awarded to a worthy individual, as usually is the case, but a world class organization: the Vienna headquartered International Atomic Energy Agency (IAEA) was the 2005 recipient, which shared the prestigious Prize with its Director General Dr. Mohammad El-Baradei.  Mr. Boyajian acknowledged the Zoryan Institute as an international center for having stressed the highest standards of scholarship and objectivity in undertaking and supporting multi-disciplinary research, documentation, lectures, seminars and publications to increase awareness on issues related to genocide prevention and human rights violations.  Drawing an obvious analogy, he concluded his speech by saying that just like Dr. Mohammad El-Baradei of the IAEA, Mr. Greg Sarkissian, the President and a founder of the Zoryan Institute, is rightfully entitled to share Zoryan’s successes and triumphs over the past 25 years.

This was followed by a video presentation on the Zoryan Institute; though the sound system was a bit disturbing, it clearly highlighted the important contributions made by Zoryan.  Additional descriptions and words of appreciation of Zoryan’s work was presented by Mr. Jack Stepanian, Chairman of The Diocesan Council.

Mr. Greg Sarkissian was then invited to the podium.  He was clearly moved and appeared very pleased to see his vision of Zoryan come true and thanked everybody for their contributions without which he modestly claimed none of these achievements would have been possible.  Of the international scholars who have worked closely with Zoryan, some were present in the audience and he invited Professors Vahakn Dadrian and Taner Akcam, both from the USA, and Professor Yair Auron from Tel-Aviv, to share their thoughts with the audience.  Also, Professor Stephen Feinstein (USA) was invited to read a letter from Professor Roger Smith, Chairman of Zoryan’s Academic Board of Directors, who was unable to attend because of illness.  All emphasized the indispensable work Zoryan has rendered to scholarly research on genocide and human rights issues.

His Eminence Bishop Bagrat Galstanian, Primate of Canada, announced that His Holiness Karekin II, Catholicos of All Armenians, has bestowed an encyclical (Gontag) to the Zoryan Institute on the occasion of its 25th Anniversary, which was read by Rev. Father Zareh Zargarian, pastor of the Holy Trinity Armenian Church of Toronto.  It was also announced that His Holiness has issued an encyclical and St.Sahag-St. Mesrob Medal to be bestowed upon Mr. Greg Sarkissian the following day at the Holy Trinity Armenian Church during liturgy for his persistence and continued contributions to the success of the Zoryan Institute. Congratulatory letters were also received from Stephen Harper, Prime Minister of Canada; Robert Kocharyan, President of the Republic of Armenia; Mr. Vartan Vosganian, Foreign Minister of Armenia; Mr. Berge Setrakian, President of AGBU; and Mr. Hrair Hovnanian and Dr. Roupen Adalian of ANI.

Dinner was followed by an informal social hour when guests intermixed and chatted with each other until the legal parting time of 11:00pm.

It was noted publicly and privately that the evening was well planned with professional efficiency.  Congratulatory remarks were directed towards all four organizing committees and their members.  Mr. Ara Boyajian was singled out for special thanks when the Primate of Canada Bishop Bagrad Galstanian announced and acknowledged that he was actually the originator of the scheme of celebrating Zoryan with the participation of all Armenian organizations and he played a central role in the entire planning.  The Primate also announced that through the proceeds of the event, The Diocese donates $15,000 to the Zoryan Institute, in support of its academic mission.