2015 marks the 100th anniversary of the Armenian Genocide. A time when Armenians and other ethnic minorities living peacefully in Eastern Anatolia for centuries were killed or marched off into the desert to die of exhaustion, starvation, or at the hands of Ottoman Turkish soldiers. Families were torn apart. They lost their lands, their homes, their lives. 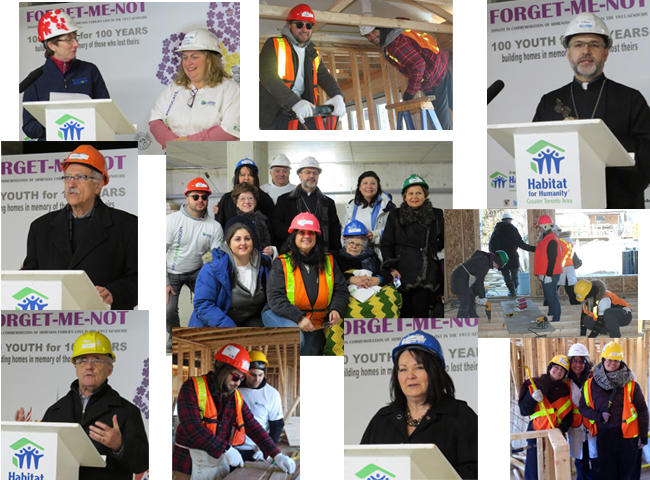 On Saturday, March 28, 2015 the Brimley site was full of activity in sub-zero temperatures, despite the sunshine. Opening remarks were made by Habitat CEO Ene Underwood followed by remarks of Roxanne James, MP, Scarborough Centre, as well as Mr. Krikor Chitilian, the Chair of the Armenian Genocide Centennial Committee of Canada.

The Armenian Family Support Services’ Chair, Mrs. Maida Icliates was invited to speak next. In her speech, she explained the main goal of this project as follows “Coming together in a Memorial Faith Build helping to build homes in the memory of those who had to leave their HOMES in 1915 is a most wonderful humanitarian mission demonstrating our goodwill spirit, kindness and love for our fellow neighbours. WE do not ask who these homes are for…we come together to work and help for those who need it. WE raise awareness through positive action and demonstration of love rather than hate. We come together to thank Canada, who opened its doors to the Armenian orphans. We express our gratitude that on April 19, 2006, the Right Honourable Stephen Harper, Prime Minister of Canada, the Senate of Canada and the House of Commons adopted motions that acknowledge the Armenian Genocide of 1915.

However, we, the children of the martyr’s, the refugee’s gather, we must realize and continue to NOT Remain SILENT, to NOT remain indifferent.” She thanked Ms Ani Kokorian, the Project Lead on this Faith Build, the Executive Committee members, the Armenian Genocide Centennial Committee as well as Habitat for Humanity Toronto, their staff and volunteers.

Ms Underwood invited the Parish Priest of Holy Trinity Armenian Church, The Rev. Archpriest Fr. Zareh Zargarian to deliver his message. Fr. Zargarian introduced Mrs. Eugenie Yerganian Kokorian, orphaned as an infant during the Armenian Genocide, who will celebrate her 100th birthday in the coming weeks. Her story touched the hearts of all who were present and brought further meaning to the day’s events. Fr. Zargarian invited all to join in prayer and singing the “Der Voghormia”. In his speech, Fr. Zargarian extended appreciation to Canada, the country that welcomed the orphans who settled in Georgetown and assisted the survivors of the genocide to start new life in Canada. He also thanked the Habitat for Humanity, Toronto, the organizers, and volunteers working under the leadership of Mrs. Maida Icliates who has been the backbone of this wonderful projects for 9 years with Habitat for Humanity Toronto.

Mrs. Eugenie Yerganian-Kokorian was surrounded by her loving family members, together, representing four generations of survival. Her son and daughter-in-law, Mr. & Mrs. Bedros & Sonia Kokorian, her granddaughter, Ani Kokorian and great grandchildren, Saro and Sareen Khachadourian, friends and supporters celebrated together on this memorable day.

Everyone extended their support and encouragement to those who were there to build in memory of lost lives and lost homes during the Armenian Genocide.

The Forget-Me-Not banner gave people the opportunity to make donations towards the project at the Holy Trinity and St. Mary’s Armenian Apostolic Churches. Each petal in the flower was dedicated to the memory of family members their loved ones lost during the Armenian Genocide. The banner helped to reach the goal of $20,000 for Habitat for Humanity.

The volunteers will continue building at the Brimley Habitat for Humanity sight on April 11, 2015. Please contact the Armenian Family Support Services office for registration and to support the “100 youth for 100 years” project by calling: 416-431-5549 or by email: info@afsstoronto.org .